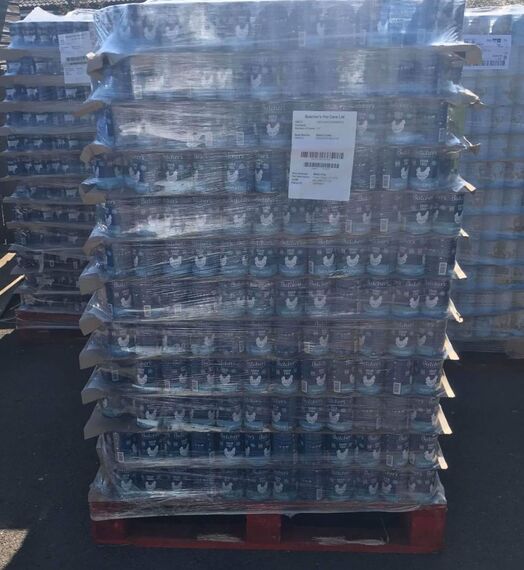 When Caged received alarming phone calls from industry partakers pleading for help with their dogs, we decided to put all our differences aside.

One informant told us;
"We will find it impossible to cope on the little funding provided by the governing body of dog racing, during lockdown, and if this means we have to feed our children before our dogs, we will have no choice, surely you can understand that?
"who knows, if dogs will be destroyed if trainers can't afford to keep them, we need help"

We took it upon ourselves to  discuss the situation with numerous rescues who told us that they were fearful about how they would home dogs whilst unable to carry out home-checks due to Covid19 government restrictions. This great uncertainty amongst rescuers was of course understandable at such early stages.

We had to face the possibility that trainers may be left in a predicament where they could not afford to feed their dogs and they would be unable to place them in rescue.  We became concerned that they may choose to destroy dogs if left with no other alternative, due to what some viewed as inconvenient funding by their industry during lockdown.

Caged were asked to help, and so we agreed that we would put our political views on greyhound racing on hold, strictly to help the dogs. The 'Food4Life Appeal' was launched.

We refused to turn a blind eye to this dire situation, and was not willing to accept that dogs could go hungry, or be needlessly destroyed due to an industry that made substantial amount of profit from racing and gambling, but in the view of many, not appearing to have substantial emergency funds set aside to adequately provide for the dogs they depend on for their lucrative business.

During distribution of dog food, we became under attack by a small group of industry partakers who were more financially stable than others and whom then began false allegations claiming our motive was not legitimate.
Meanwhile we received several calls from trainers who thanked us for helping them, but told us they were too frightened to accept anymore food.
We gave these specific trainers our 100% assurance that their details would stay discreet as they appeared to fear for their future within the industry. We began to arrange neutral drop off and pick up points for food, with several independent rescues assisting. We were deeply saddened that attempts would be made to stop dogs from receiving food due to the animosity against us.
​The greyhounds should have been everyone's priority!

GRACE Rescue told us; "During the lockdown I saw trainers struggling to feed their dogs. The GBGB were offering 50 pence for each dog per day. The dogs would undoubtedly suffer so I felt the need to offer the support for the greyhounds throughout the country. As a rescue I see how quickly a greyhound can lose weight through an injury without the stress of not knowing where their next meal is coming from. Trainers were threatened by the GBGB that they would be penalised if they accepted food from antis. For those of us who are working for the welfare of the greyhounds feeding these dogs was paramount. After speaking with a representative from the GBGB they refused the offers of food even when explained to them that this food was the same as the greyhounds would normally be fed. The GBGB in my opinion have put their own agenda above the welfare of the greyhounds and allowed many greyhounds to suffer due to their arrogance" 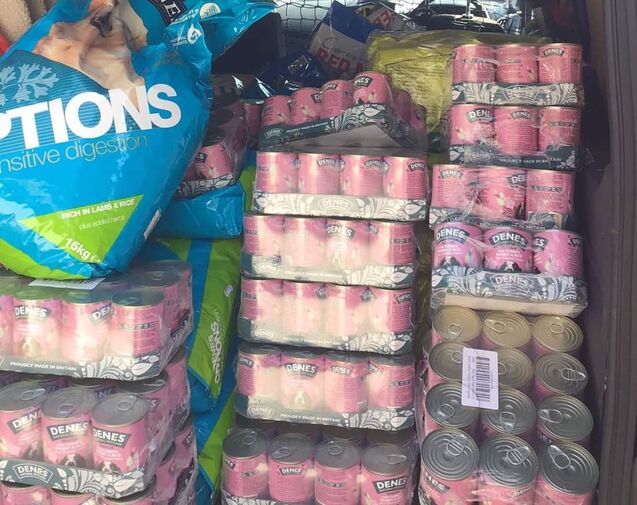 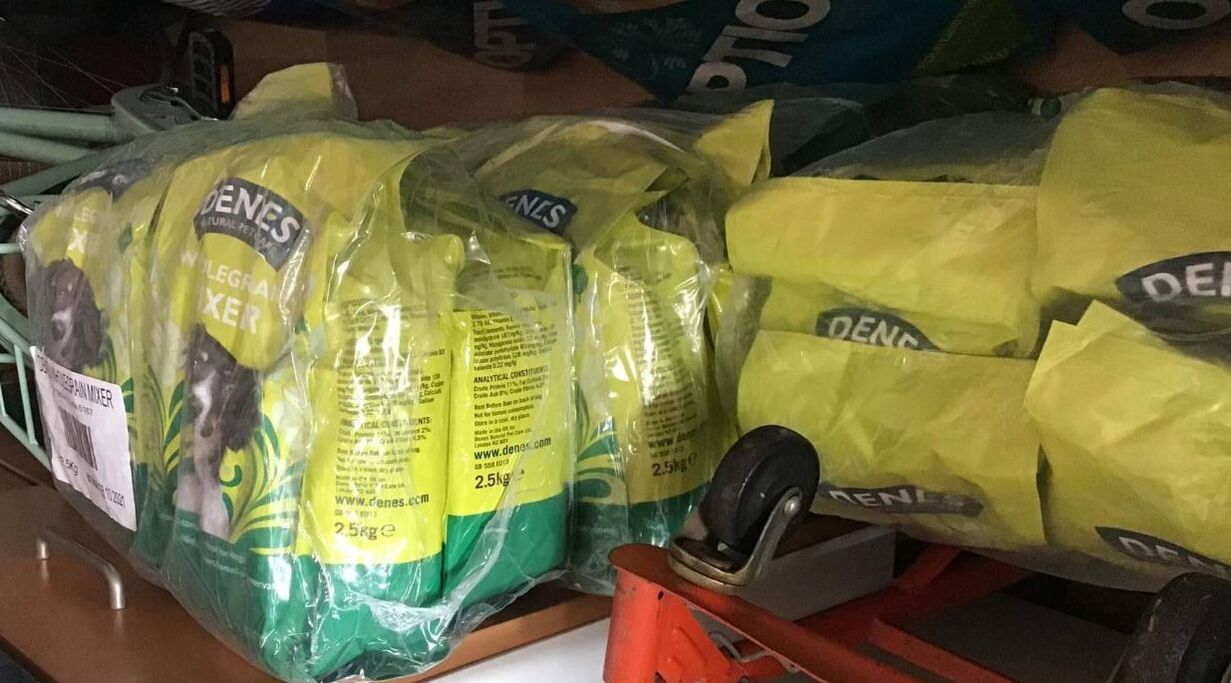 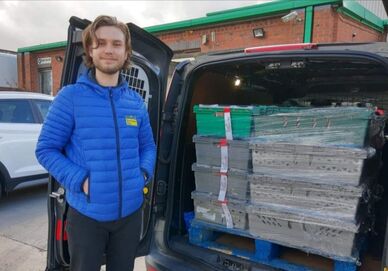 Big Thanks to Butternut Box who worked to donate and deliver food to our volunteer drop off points around England.
Caged Food4Life appeal features in a national newspaper 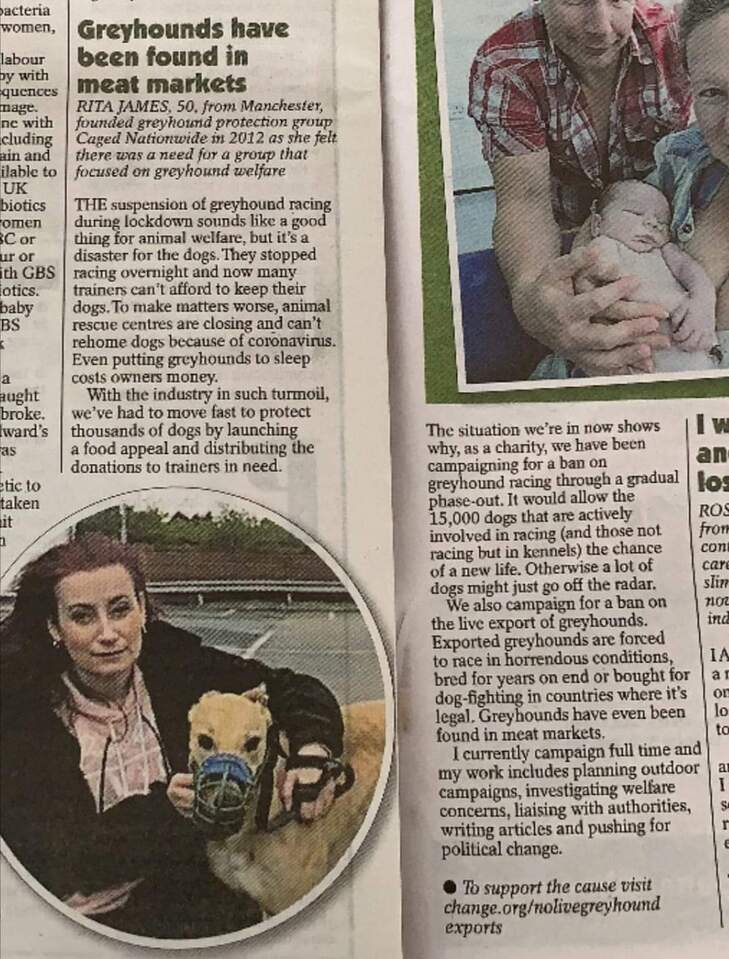