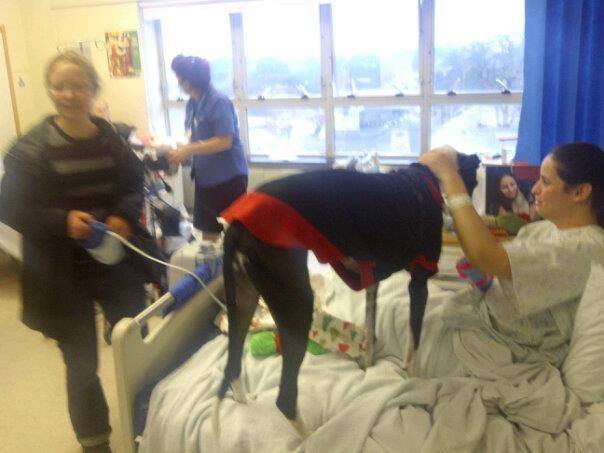 My name is Carla. I was brought up in Madrid until I was 19 years old and went to university in the UK. My mother is English and my father Spanish. As an animal lovers family Since I remember we have been collecting dogs from the streets. I had all sort of dogs before I discovered the Galgos. Ten years ago we lost a lovely 10 year old dog to cancer, my father specially, was devastated swearing he would never get another dog. Three months later we saw on a TV a poor Galgo that escaped from hanging with the rope inside his poor neck. My father said, huuuuumm, we have room here for a Galgo. Three months later we had our first Galgo called Zara. We were not familiar with Galgos, they were so different from the other dogs that we fell in love with them so we adopted a second one called Luna. You do become addicted to this type of dog, this is called galguitis.
I was back in the UK starting my PhD at the royal veterinary college, I was missing my houndies so much that I decided to adopt another Galgo. I was wrong thinking that having another Galgo would stop me from missing Zara and Luna. So I went to Greyhounds in need and I was lucky to get Winnie. She is a 2 year old black and white Galgo, very cheeky and friendly. She was very confident although you could see she has been beaten up in the past, Courtesy of the Galgueros in Albacete in central Spain. I am lucky I can take Winnie to university and that my landlord allowed me to have a dog. Winnie settled in so well!. It felt like we were made for each other. I never had to make an effort training her, everything fell into place so fast that I felt I lived with Winnie all my life. It has been an effort to change my ways, having Winnie has changed my social life a bit. But I have done it with pleasure. Also a dog cost money, so I have to give up a few things to have enough money for Winnie. I must say that I might over do it a bit. Winnie has a bigger wardrobe than I do and quite a few toys..... I suppose I could spend less on Winnie but i take more pleasure on getting things for her than for me. Winnie comes with me practically everywhere. I take her to university, she has a bed under my desk, I take her on holidays to Spain, I take a ferry with a pet friendly cabin instead of flying. Also I took her to my farm visits of my PhD which were all over the country. During one of the farm visits I was driving south in the M5 motorway when a woman fell asleep on the other side driving a van. She lost control and hit the central reservation landing in front of me. It was a head on collision with an impact of 120 mph. I was trapped for 50 minutes until the air ambulance took me to Derriford hospital. I cannot remember anything but I was told I was awake and I only wanted to see Winnie. The air crew brought Winnie to the helicopter so I could see her and then I passed out once I knew she was okay. I was unconscious for 3 days. In the meantime a kind police officer took Winnie to the vet in Cullompton where Winnie had an internal haemorrhage and had her spleen removed. When I woke up the first thing I did was to ask after Winnie and the vets were so kind they called me every day and sent me pictures of her. I was in a mess. Both my knee caps were broken and my ankle was broken and my left femur exploded into many pieces and my right hand was reconstructed among other things. A good friend of mine went to collect Winnie 20 days after the crash to the vet and the staff allowed Winnie to visit me at hospital. One year after the crash Winnie is fully recovered and I am starting to walk again although I still need further surgeries. Everyone says that Winnie is a lucky girl because I adopted her. But I think is the other way round. I am lucky to share my life with her. She has helped me in every way possible. She kept me company, always brought a smile in my face. Instead of getting depressed about my situation, having Winnie has given me an aim and a necessity of getting better fast so I can take her out for walks, and instead of being in bed feeling sorry for myself everyday I walk her for 2 hours. This has allowed me to get stronger fast and kept me sane. Things happen for a reason and Winnie has saved me in everyday possible. My advice to everyone is to adopt a Greyhound/Galgo. These dogs are special. They are so gentle, clean, easy going, sensitive, good with children and they need your help. The situation, of Galgos in Spain and ex racers in the UK is desperate, thousands of them are being killed and tortured every year. If you can take well care of a dog and you are thinking of getting a dog. Think about adopting a Greyhound/Galgo. You cannot go wrong with these dogs. They are special. The only risk you have is that one is not enough, I warn you that they are addictive.
Also I would like to share for all the dog owners. Please when you take your dogs in the car, make sure they are wearing a harness connected to the seat belt. It can save their life and yours. Without the harness Winnie would not be with me.