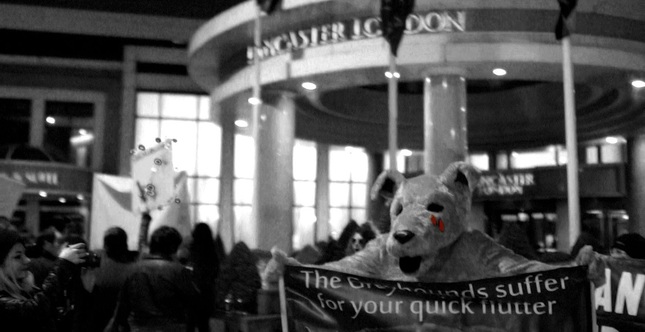 So we did it again, solidarty for the greyhounds at the GBGB awards gala at the Lancaster London Hotel 2016
Over 140 greyhound advocates united to give the dogs a voice as captured in the wonderful video shot by Gavin Erickson
Thank you to Liz Benjamin for capturing the night through your camera, pictures below
The Greyhound Board of Great Britain (GBGB) are due to hold their annual awards ceremony, this is where they gather to congratulate one another irrespectful of the millions of dogs that have lost their lives since greyhound racing began in the UK.
Greyhound racing is self governed and regulations are not properly enforced, likely due to the vested interest of all those involved.
A recent Parliamentary Inquiry has recently taken place to re-assess the 'Welfare of Racing Greyhounds Regulations 2010' this inquiry usually takes place every 5 years.
Campaign groups - LACS - Grey2Kusa - GreytExploitations and Caged North West have all requested the following;
1) An independant body to replace the GBGB
2) Injury data to be released
Sadly it seems that neither of the above may be achieved.

2.5 billion pounds is wagered on greyhound racing annually and grants received by the tracks are used to purchase new bars, carpets and other luxuries rather than contributed towards any necessary maintenance of the tracks, kennels etc, as per usual the welfare of the dogs remains to be insignificant.
Dogs have escaped from track grounds and been left open to the eliments in freezing conditions, due to the perimeter of the grounds being inadequately fenced (Sheffield)
Dogs have died through insufficient maintenance of temperature in holding kennels ( Henlow)
Dogs crashed head on into traps at 40mph when the mechanism of the traps failed (Romford) 2 dogs seriously injured
Towcester - Incorrect surface on track
Belle Vue - Poor drainage on tracks
Both of the above issues are discussed by pro racing community and are said to be causing additional falls, and some which may result in death.

Around 80% of UK greyhounds are bred in Ireland, where laws are practically non existent. All  puppies are trialled and out of around 24,000 only 16,000 make the grade and are registered to race - Puppies are culled - Many who make the grade go onto a miserable life, kennelled around 23 hrs per day, spending much of their time being transported to and from tracks, many fed contaminated food, others may be destroyed at the tracks either for minor injury when no longer a commodity, even worst some will not be afforded the small fee for euthanasia and will be disposed of by inhumane means.

It is legal to destroy a greyhound when no longer of use.
The Captive bolt gun remains legal since the 2006 killing fields where around 10,000 dogs were killed by a bolt to the head by a builders merchant in Durham, who was never punished for commiting acts of cruelty. No new law has been introduced to prevent this and we believe many dogs are being killed by this method behind closed doors.
This is not just about a few bad apples, as many dogs go missing each year presumed dead

For the above reasons we believe the GBGB should be overthrown and an independant body introduced...

Please come along to this peaceful demonstration on Sunday 24th January at 6pm and be a voice for the greyhounds who continue to suffer in silence.

The dogs need your support - Together we can show the racing industry that the cruelty existent behind closed doors is no longer a secret...many people bring these dogs into their home while they bear the emotional and physical scars of the racing industry.

All protest materials will be provided by Caged North West - Banners - Flyers - Lights
Please refer to our protest guidelines - See under; Raising Awareness
Please refrain from bringing dogs or young children to the protest as it will be very crowded, noisy and and nearby a busy main road
The protest will remain peaceful throughout
There may be a police presence depending on the amount of protesters attending
There will be CCTV in use on the day for the protection of protesters
Each person will be responsible for their own actions and safety

This protest welcomes people from all walks of life and gives everyone the opportunity to air their voices against the cruelty.
﻿ 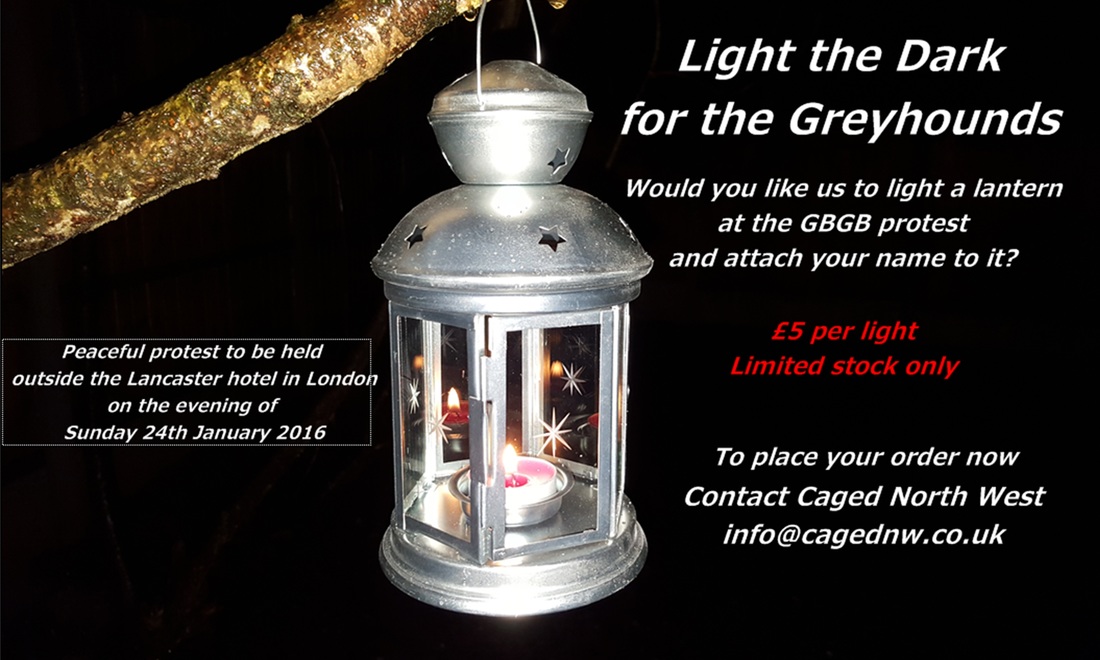 CLICK HERE TO JOIN THE FACEBOOK EVENT
If you cannot attend the protest but want to be part & help out, please give a small donation towards the materials to be used at the demonstration.