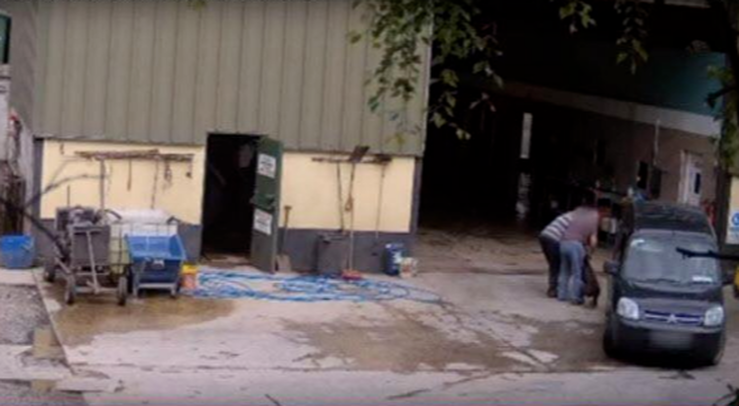 Photo taken from RTE documentary. Black greyhound struggles before he is horrifically executed.
Liam Dowling, jumped to the defence of the dog racing industry in an article published by the Irish Examiner.

Mr Dowling could have used the opportunity to address the serious greyhound welfare issues which are creating a massive withdrawal in support for dog racing by both its sponsors and the general public. After all, the dog racing industry has been faced with some pretty damming reports and exposures, including a broadcast on prime time TV showing greyhounds being shot through the skull at Irish knackeries.

Viewers will NEVER forget the trembling black greyhound who froze to the ground, before being dragged to a merciless execution by a bolt through the head, at what has now became the infamous John Styles knackery.
​
To cry propaganda adds further insult to injury' following the horrendous scenes of barbaric cruelty that was uncovered by 'RTE Investigates, Greyhounds Running for Their Lives'
When referring to the RTE Documentary,
​Mr Dowling stated;
​
"It also included a film on animal abuse in China. That was in China! What has that got to do with us in Ireland? Absolutely nothing"
The following list shows the last ICC registered owners of approximately 50 Irish and British raced greyhounds that we have located on Chinese breeding and advertising databases.

We are publicly reaching out to Mr Dowling to ask if he would kindly retract his earlier comments in light of the hard evidence we continue to produce, and to offer the public some clarity by kindly assisting us in contacting all former ICC registered owners of Chinese exported greyhounds named on our list, and to offer them each the opportunity to explain why it appears they have not updated the ICC as lawfully required with any 'new owner' details; that assuming they did not export any of the dogs themselves. 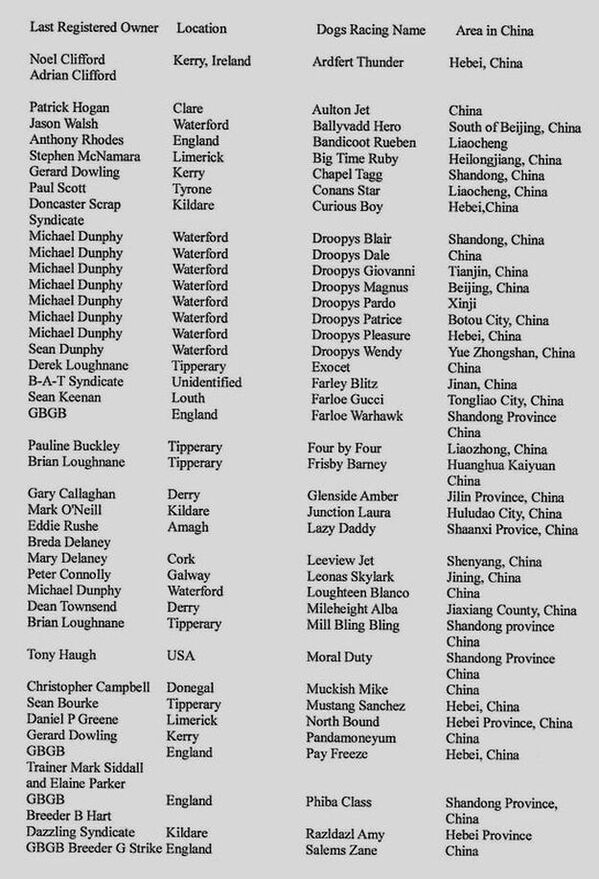 Traumatised and emaciated Irish and British raced greyhounds have been rescued from China and brought to the UK.

The above 3 dogs were located on a Chinese breeding database by Caged - We regularly pass data onto rescuers - All 3 dogs were rescued by Greyhound Protection UK and brought back to safety in Great Britain!! These dogs remain to be physical evidence and had proven our data to be accurate.

We understand that Greyhounds are intelligent dogs but even if they were capable of applying for a passport, packing some bones, and shipping themselves half way across the world, we doubt they would choose a country where their own flesh is desirable.

Liam Dowling dogs showing as stood in Pakistan and Spain
'Countries with zero greyhound protection'
We would like Mr Dowling to provide an explanation as to;
1) Why his dogs are showing in countries where there are NO up to date animal welfare laws?

2) Why it appears that his information has not been updated as lawfully required, on the ICC website, for his dogs exported overseas, presuming he did not export them himself?

The sources we used to obtain this information;

1- Irish Coursing Club - Formally established since 1916, is the body that is the controlling authority over matters relating to coursing and the registration and identification of thoroughbred greyhounds in Ireland; https://irishcoursingclub.ie/

2- Greyhound Data - The largest international database in the world, for racing and breeding of greyhounds and the publication of greyhound racing results; https://www.greyhound-data.com/

We understand that when faced with defeat, trainers may feel compelled to deny the facts, stamp their feet and cry propaganda but it must be understood that intimidation, fabrication, name calling and threats, will not succeed in bringing the anti racing movement down. We will not be intimidated by any means and shall instead further substantiate all evidence of exploitation and cruelty to greyhounds.


We have created this informative page in response to Mr Dowlings allegations of propaganda against the anti racing movement; we are under the assumption he may be eager to bring clarity to the public by answering our aforementioned queries relating to his dogs shown in Pakistan and Spain, and secondly to bring clarification as to why there appears to be failures by former greyhound owners to update information, as lawfully required, on the ICC website in relation to their dogs showing in China, presuming they have not exported the dogs themselves.