The Hidden Truth of Greyhound Retirement and unregulated racing 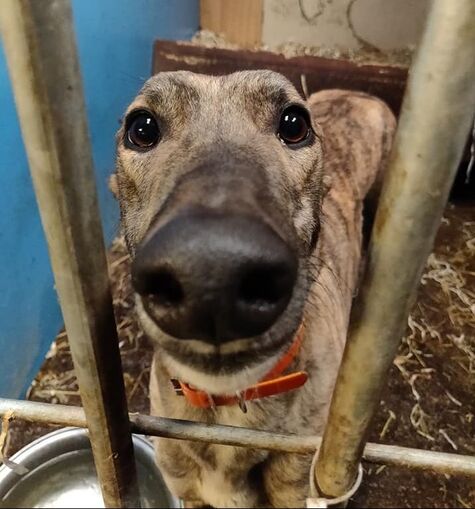 Most recent case found:
Greyhounds kept in ramshackle shed in Bradford during all weather conditions whilst used for unregulated racing.
​
Our concerns
Lack of warmth (No electricity supply visible) - Lack of Ventilation (Risk of overheating in warm temperatures) - Lack of Supervision (Owner lives almost 2 miles away) - No running water (No nearby tap visible) Dogs are confined to this area for up to 23hrs per day.

In sub zero temperatures, drinking water begins to freeze
Greyhounds are particularly known for being unable to regulate their body temperatures as well as other breeds of dog. This means they are higher risk to hypothermia and Heat stroke. Both can lead to seizures and death.
​
The Animal Welfare Act 2006 requires dogs to be kept in a suitable environment.

Thank you to the 1400 people who responded to our appeal by objecting to the retrospective planning application to keep dogs in a ramshackle shed!
​
The application was thankfully refused by Bradford Council's planning department, but we were later advised that the applicant was set to appeal the decision.
​
After making several visits to the shed, we contacted the director of the planning inspectorate and stated our concerns for the dogs.

​We kept up the pressure ...then this happened.. 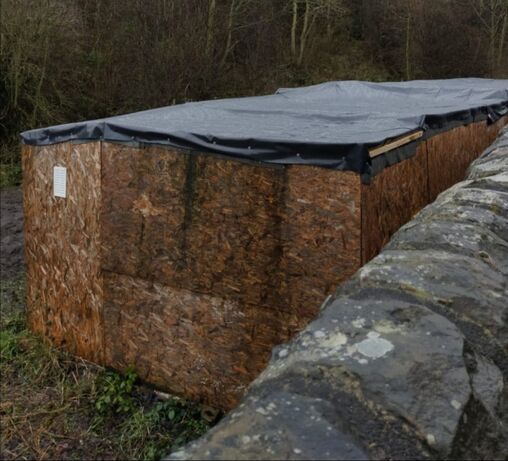 Structure: Exterior walls 12/18mm OSB sheet - (OSB are classed as general-purpose, non-loadbearing panels for interior fitments and furniture in dry conditions) - Timber frame made from 3"x 2" sawn timber - Roof Materials - Combination of 12/18mm OSB sheet material covered with roofing felt and in areas PVC corrugated roofing sheets.  UPVC plastic door and very small window facing away from road
Lighting- Applicant claims street lighting is sufficient - No electricity supply - Ventilation - One small plastic vent is visible on the above photo
No mention of insulation
UPDATE!!
The dogs appear to be suddenly with a homing company who have bizarrely quizzed our concerns​ 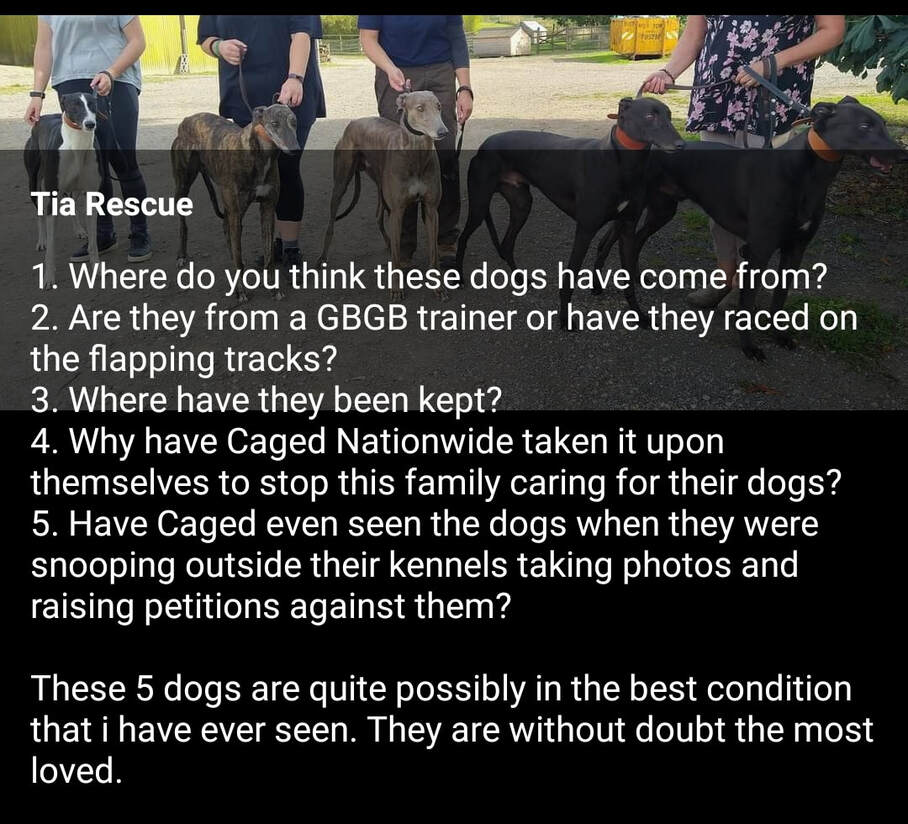 Dear Tia; If you are referring to the dogs in Bradford;

1) The dogs belonged to an unlicensed greyhound trainer in Bradford.

2) The trainer admitted to racing his dogs - We understand that they were raced at an unregulated greyhound track.

3) The dogs were living in a very damp and poorly constructed wooden shed which was built in a desolate area on greenbelt land without any planning permission.

4) Caged Nationwide had received dozens of calls from members of the public who were concerned for the safety of the dogs. We took note of the planning application details including the location and structure of the shed before visiting to see it for ourselves. The structure, lack of utilities and the location of the shed caused us grave concern.
We were aware that there had been cases of arson in the area.
We found the dogs were left unsupervised for most of the time and each time on our arrival we could hear them howling. The shed had one small window, with approximately a 10inch opener and one very small vent. We could not find any trace of light or electricity supply to the shed.
Under the AWA 2006 dogs are entitled to temperature control, including warmth and ventilation to prevent overheating/ stroke/ hypothermia.

5) Caged Nationwide did not raise a petition against the trainer/owner.
The dogs could not be seen without entering the shed due to the enclosed structure, (we reiterate, that there were no windows other than a small opener, and no sign of light)

All of our concerns stemmed from the dangers posed to the dogs by being confined to a damp wooden shed in a desolate area with nobody living on the site to supervise, with no sign of lighting on the land, and of what appeared to be an unsuitable structure for any animal. A wooden enclosed structure could expose dogs to many risks. (We seriously question the ethics of anyone that would agree with keeping animals in this shed)
How the dogs appeared to look was not relevant as we were specifically objecting to the potential for the dogs to suffer or die, due to the structure of the shed and the lack of utilities and security.
If at any time, we had believed that the dogs were emaciated or at immediate risk, we would have sought a warrant for a qualified vet to enter the shed. We instead regularly observed to ensure that the dogs were not in any immediate danger.
A couple of photos were made public simply to bring transparency, in that people could view the structure, condition and position of the shed before deciding whether or not they felt it was necessary to lodge an objection to the local authority ( Additional information regarding the sheds structure and utilities were available on the council website)
​1400 plus objections were sent to Bradford council within a matter of days.

If Tia is referring to the Bradford dogs; We are very pleased that the owner/applicant, has taken the right steps to ensure the safety of his dogs and we are thankful to him for making the decision. We are pleased to see all of these dogs photographed in the hands of a rehoming company.

We take no offence to Tia asking us questions and can only presume their ethics are as good as those of Caged Nationwide, who ALWAYS ensure a home check is carried out before placing a dog with new adoptive owners.

Greyhounds are classed as retired even when they are retained by their trainer/owners, providing that a green retirement form is completed and submitted to the Greyhound Board of Great Britain.
Once no longer registered to race, the dogs welfare is NO longer the responsibility of the Greyhound racing industry governing body.


Expired NOT Retired
Existing NOT Living 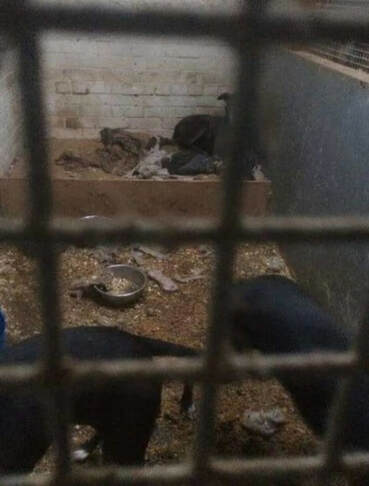 Judith Glasper was provided with a kennel hand license by the Greyhound Board of Great Britain just one year after her greyhounds were found suffering in the most inhumane conditions imaginable.
​ Read the full story here - https://www.cagednw.co.uk/greyhound-breeder-exposed.html
Please click the image and sign the petition to gain protection for retired greyhounds 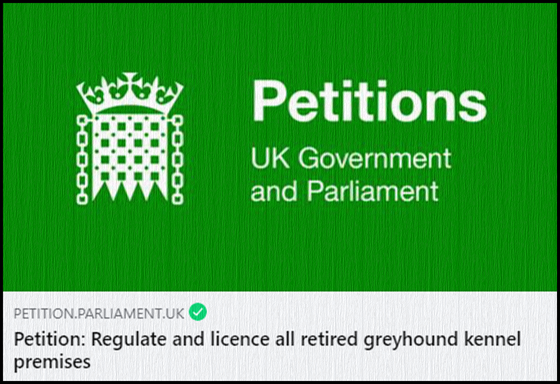 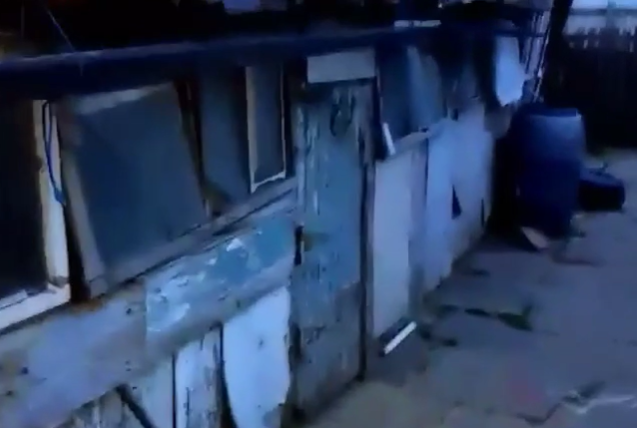 Caged and GRACE Rescue found the dogs had NO access to water, no heat and no proper bedding.
GBGB stipendiary stewards refused to attend, claiming they were NOT responsible for retired dogs.
Pat Simpson admitted that one of the dogs was still actively racing.
​The RSPCA told us the conditions were fine.
We had removed 4 dogs that were relinquished to GRACE by Pat Simpson - The RSPCA Inspector intervened and advised that they did not allow us to take anymore dogs. We were later told by residents that the remaining dogs were removed by the RSPCA inspector after we left the premises.
The RSPCA refused to tell us where the dogs had been taken to.
​See the full story here: https://www.cagednw.co.uk/allotment-watch.html
The Dorset 7

In 2017 we received a phone call from a distraught lady claiming a former Poole greyhound trainer was preparing to have 7 greyhounds shot;

"Please can you help, I need to save some dogs that are going to be shot by the local hunt.... she really is going to kill them"

The GBGB told us "Retired dogs are not our responsibility"

The former Poole Greyhound trainer told an International Greyhound rescuer;
"I will kill my dogs rather than give them to a rescue"
​
.....Days Later She Said
"It's done"


A Local Hunter calmly told us;
"I gave Eve the telephone number of the local hunt, so that they could shoot the dogs to put them out of their misery. The dogs were suffering so badly.. I have lost weight and sleep because of what I witnessed"

"Dogs were locked up in the dark wet kennels for 24 hrs per day, and some are being slowly starved to death before they are placed into bin bags and disposed of"

Dorset Police were informed of the circumstances surrounding this case.
The RSPCA told us that the former trainer refused to answer questions of what happened to the dogs and she appeared to be suffering from dementia.
Mrs Blanchard showed no signs of forgetfulness or confusion when speaking with Caged and actually arranged a date and time for us to arrive at her kennels where she was waiting for us when we arrived days later.