ConcernsWe were told that 15 dogs were due to be transferred to Carol Evans on 11th September 2016, a Greyhound Trainer at Perry Barr, who has a history of disciplinary action against her 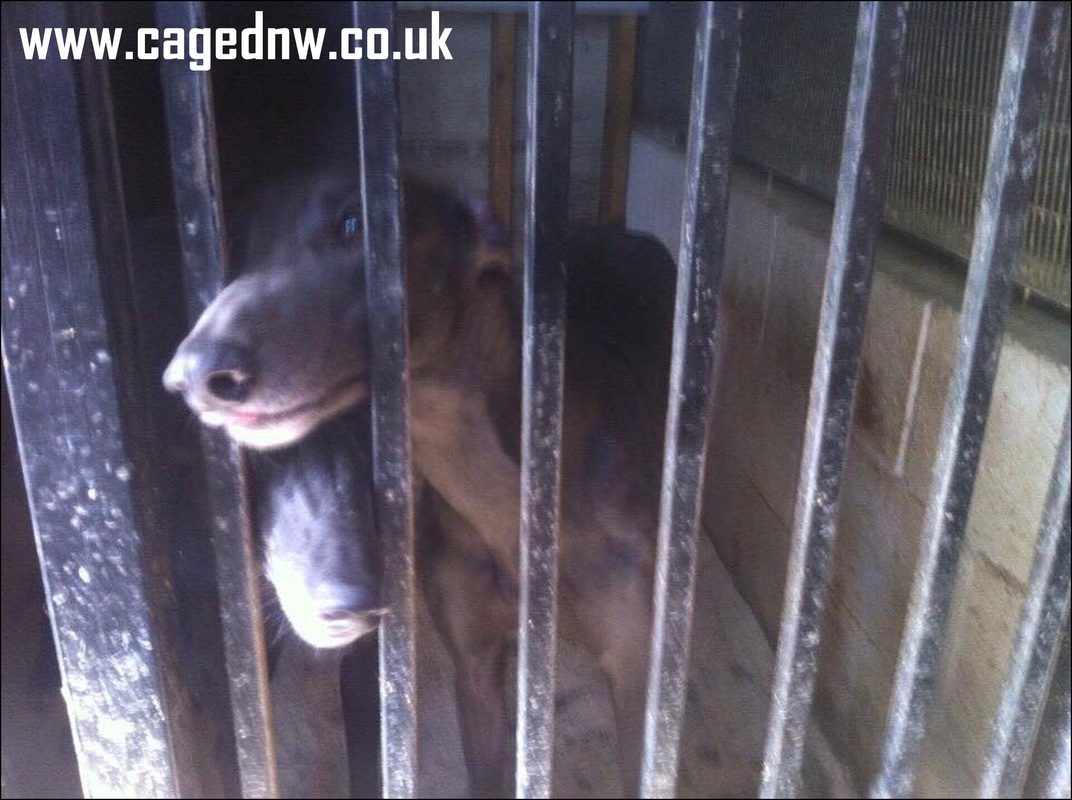 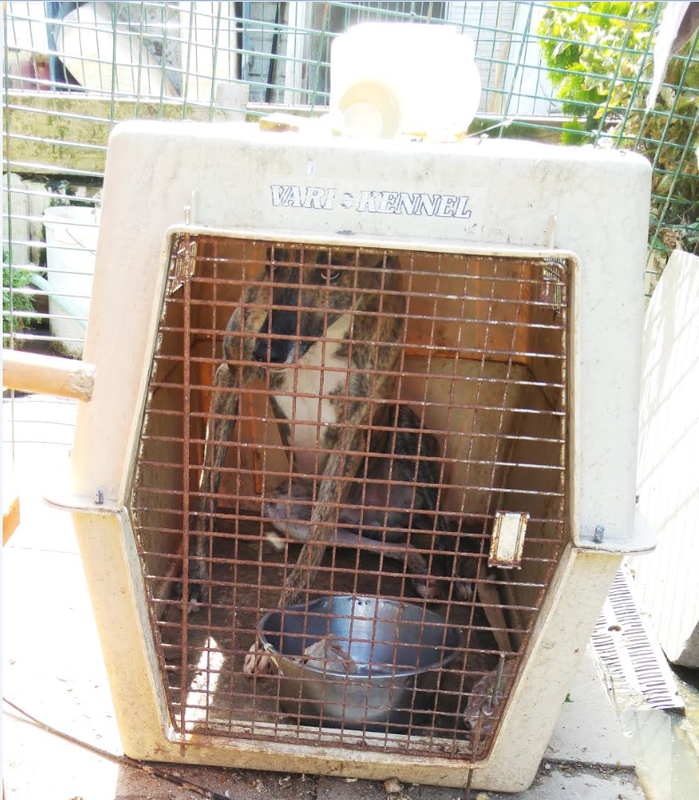 Above - Sad Greyhound
Crammed into a container, with barely any room to move and no bedding
Greyhound Board of Great Britain - 'The Governing Body of Greyhound Racing' Licensed Kennels

"The GBGB has appointed a Stipendiary Steward for the Central and East Midlands; Pete Rosney, who will join the GBGB on May 18th.

Rosney has spent most of his working life as a police officer and has long had a keen interest in the sport, having been involved in Greyhounds since he was a teenager.  He is the brother of professional trainer Pat Rosney.
Senior Stipendiary Steward Paull Illingworth welcomed the appointment: “I’m delighted to welcome Pete Rosney to the team and look forward to working with him when he starts next month.”

Caged North West wrote to the GBGB, due to the animal welfare concerns. We received a one lined response concerning a media response to our exposure 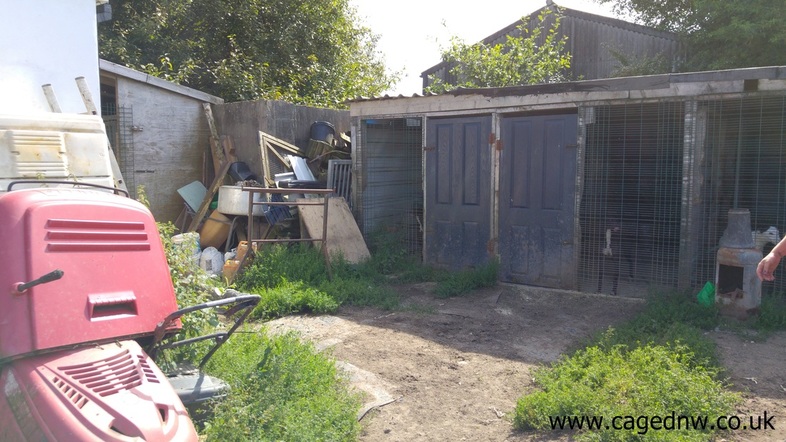 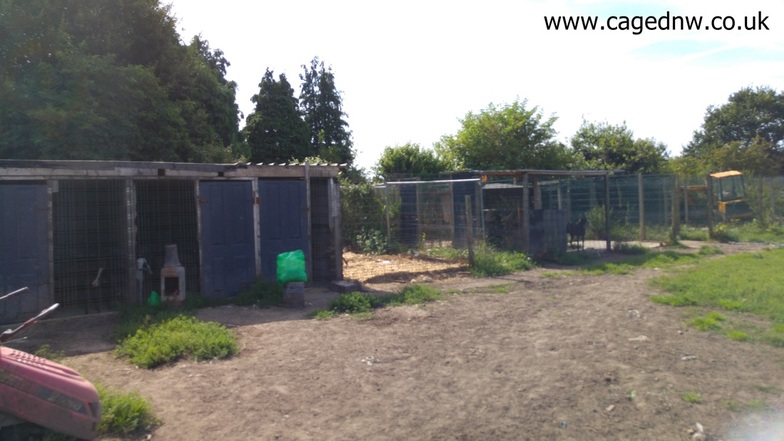 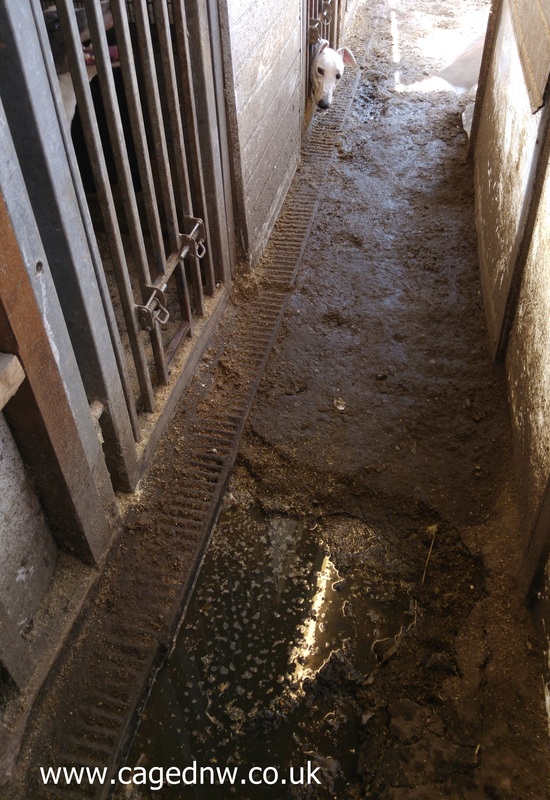 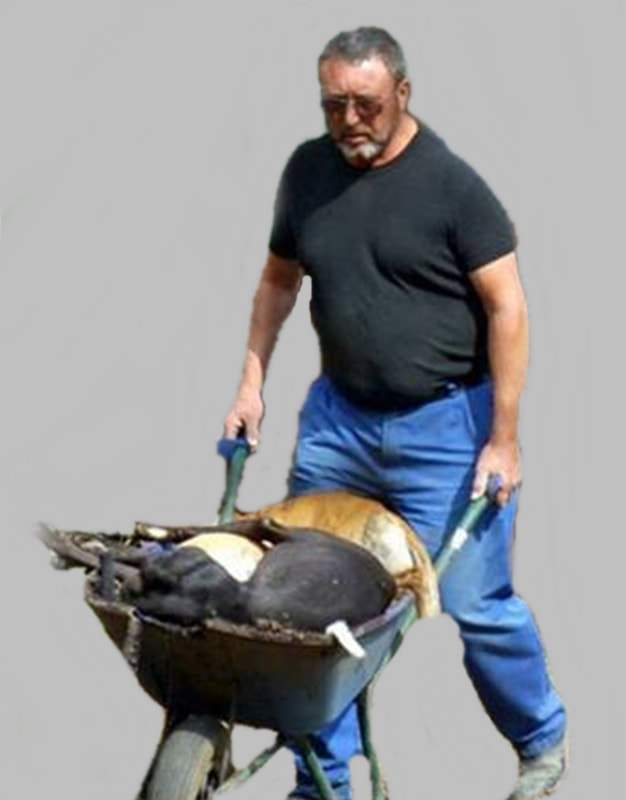 Louise Eccles authorised the below 10 Marshbrook dogs to be given to rescue, but later changed her mind, sending 15 of her dogs to greyhound trainer 'Carol Evans'
We have been notified that 2 of of the Marshfield dogs are now in rescue.
The above authorisation was given after Louise Eccles had abandoned her kennels, but on the 21st August 2016, several of her dogs were entered to race at Perry Barr Stadium - 7 of her dogs were withdrawn from the races intended.

Who made an attempt to race these dogs against GBGB regulations, while under the use of Mrs Eccles Greyhound Trainers License?
We have been advised by insiders that 76 year old Mr Eccles has applied to the GBGB for a license to race his remaining dogs

Neighbours in the area have told us that their lives have been a living nightmare, with the noise pollution from the kennels, but complaints to the local authorities have achieved nothing.
VIDEO FROM INSIDE THE KENNELS
This video was sent to us anonymously which shows the kennel hand explaining how the greyhounds welfare was severely comprimised, it also shows how the self regulated kennel inspections by the GBGB (Greyhound Board of Great Britain) don't work when trainers can refuse inspectors access to certain parts of the kennels & still have their kennels passed.
UPDATE ON THE ECCLES KENNELS
FORMAL COMPLAINT AGAINST NATALIE OAKES, VET-ERIN

Since August CAGED has been spearheading the exposure of the conditions at the kennels of Louise and Rodney Eccles.
As a result of information that has come to light, CAGED has now submitted an official complaint, with supporting evidence, to the Royal College of Veterinary Surgeons about Natalie Oakes of Vet-Erin concerning her involvement with these kennels. The particulars of this complaint include: that Natalie has been acting as vet to the kennels for approximately two years; that she was aware of the conditions prevailing there and the suffering endured by dogs on these premises; that she failed to report or expose this information; and that she provided the vet’s approval required for the relicensing of the kennels by the GBGB. Natalie was assisted throughout by Amanda Gething of Northern Greyhound Rescue.
The complaint is currently under investigation by the Royal College in accordance with its procedures. Consequently, whilst this investigation is ongoing, we will be making no further public comment on the matters which are the subject of this complaint, and no posts about them will be accepted on the CAGED Facebook page.

C.A.G.E.D Nationwide supported by:
Birmingham Greyhound Protection
Greyhound Rescue South Yorkshire
Lancky Dogs
Hounds First Sighthound Rescue
Greyhound Gap
ECCLES KENNEL VET NATALIE
OAKES FOUND GUILTY OF
DISGRACEFUL CONDUCT
BY THE ROYAL COLLEGE OF
​VETERINARY SURGEONS
Since August 2016 CAGED has been spearheading the exposure of the conditions at the kennels of Louise and Rodney Eccles near Warrington.
As a result of information that came to light, CAGED submitted an official complaint to the Royal College of Veterinary Surgeons about Natalie Oakes of Vet-Erin concerning her involvement with these kennels.
The RCVS Disciplinary Committee has held a hearing and found that Natalie Oakes was guilty of disgraceful conduct in dishonestly certifying the conditions at these kennels as acceptable when she was aware that they were not. Natalie fully confessed to this in the course of the hearing.
The pictures below illustrate the conditions to which greyhounds were subjected in these kennels at the time that Natalie Oakes certified them as fit. Because of this certification, Rod Eccles was allowed to continue racing greyhounds from the kennels, and he continues to do so to this day.
A number of individuals and organisations, many of whom should have known better, have taken Natalie’s side in this case. Some of them have vilified CAGED and those who supported the complaint against Natalie, accusing them of lies, fabrication, malice and other wickedness. There has also been an entirely false rumour started to the effect that the charges against Natalie have been thrown out. We shall be saying more about some of these people in later posts. Suffice to say for the moment that CAGED and our supporters have been entirely vindicated. Thanks to all those who were brave enough to support us in the face of such hostility.
Failure of the GBGB inspections
"When Rosney (Pete Rosney) comes to inspect them kennel inspection, she used to wouldn't let them out that door and all the old dogs where out there in the old kennels which where not suitable so we are in the process of knocking all them down."
EXPOSED GEORGE RODNEY ECCLES EXPORTS GREYHOUNDS TO PAKISTAN 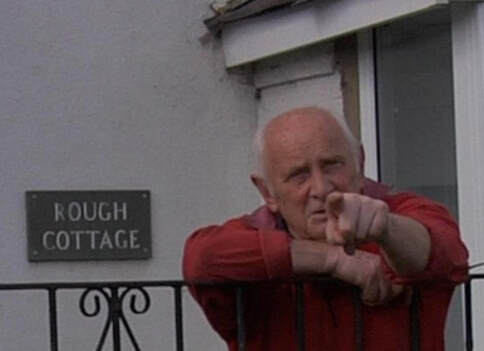 George Rodney Eccles once again makes it onto our radar!!
​
This time for exporting greyhounds to Pakistan whilst he was licensed by the GBGB as greyhound trainer!!
We have found that Mr Eccles had exported at least 2 greyhounds to Mr Ifran Muhammad in Pakistan on the 22nd January 2019 via PIA flight PK702 from Manchester Airport.
Mr Eccles was suspended by the GBGB over a year later for different reasons, of which we were told was related to greyhound welfare issues at his kennels, involving his kennel hand, Mr James Whittle.
We investigated Mr Eccles earlier in 2016 after his wife Louise Eccles, greyhound trainer, abandoned him with over 80 dogs.
Numerous dogs were removed from Mr Eccles kennels by rescuers with one dog dying on release. We were told this boy known as Rocket had been confined to a crate for 6 years with only toilet breaks.
Mr Eccles later applied for a licence from the GBGB so we pleaded with the local stipendiary steward, Mr Rosney, not to issue Mr Eccles a GBGB trainers license as we knew he would cause more harm to dogs, but of course they gave him a license regardless.