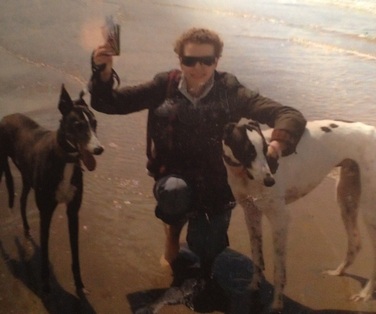 Jo with Robbie (Right) and Jim (Left)
Jim & Robbie had something in common 'they were both used by an industry that gained profit from them' but they were lucky enough to find something special ' a loving family, a comfortable home and each other '

Jim
Jim was our first greyhound and we had found him at Dogs Trust. He was an ex-racer and his trainer was from Perry Barr racing stadium, the owner would often leave his dogs at the stadium with a donation once they could no longer race and the rescue would take them. Jim had been a top racer and we think it is due to this that he was relatively well cared for.

We rescued Robbie just after Jim and his was a very different story. My dad had brought him back from his holiday in Ipswich. Robbie was just 2 years old and due to a toe injury was unable to race again 'is never a good thing for a greyhound' and the trainer was going to have him euthanised. However the vet was not happy to destroy such a young and healthy dog and so he tried to buy Robbie some time by saying the freezer where he stored the bodies was full and told the trainer to check back. My dad was in the area and heard about Robbie, he decided to bring him home to us.
Robbie was full of fleas, he was very nervous at first and he tried to run out of the house, it took time for him to gain his confidence, I remember him bounding up the stairs and we had to teach him to come back down to us.

Robbie and Jim bonded really well, they became like brothers. People used to remark on the chemistry that they showed when they were together. Robbie never fully lost his nervousness and would take his lead from Jim, he looked up to Jim. I will never forget the look on Robbies face when we first took him to a park, it was like he had never seen grass before 'perhaps he hadn't ' He grew to love the park and his dental chews too!! He used to eat chews and his Markies really delicately. Although he was scared of water I will never forget when I took him to Barmouth beach and he was absolutely overjoyed when he seen the sea and for the first time he showed no fear of water.

All of a sudden after just two years something terrible happened. I will always remember coming downstairs on the morning of the last time I was to see Robbie alive, he had gone to the toilet on the floor. He knew this was wrong and it broke my heart the way he ran off when he saw me, we knew that this was not like Robbie and that ssomething was wrong with him. My husband took him to the vets that morning and I never saw him alive again.
It turned out that Robbie had a twist in the lung and his lung had started to die, we were told this was leading to kidney failure. We took him to a vet who specialised in Greyhound health but he was so ill that he had to be put to sleep. I went to the veterinary surgery to see Robbie after he passed over. When the veterinary assistant seen how young he was, she too broke down in tears alongside us.
When I next saw Jim, he looked at me as if to ask what I had done with Robbie and he refused to eat his Markies for some time after. When we took Robbies ashes to Barmouth, Jim seemed to know what we were doing. Jim died just a couple of years later due to age, we put his ashes in with his brothers in Barmouth too.
I never thought that Robbie would die before Jim, but the vet said the twist was due to the overbreeding as they tend to try and breed greyhounds lungs to be larger so they peform better when racing.
Robbie only had two years with us but they were two fantastic years that I will always treasure.
I hate greyhound racing with a passion and that is why I will spend my Saturday nights raising awareness outside a greyhound stadium and will continue until they are all closed down.

The joy a rescued greyhound gives you is immense. You just cannot describe how
grateful they are to you for the life you give them. Anything you do for them
they give you back ten thousand fold.