Greyhound Board of Great Britain EXPOSED

This page will be updated regularly with delicate information the GBGB DO NOT want you to see.
POLICE CONFIRM ONGOING INVESTIGATION INTO THE GREYHOUND BOARD OF GREAT BRITAIN
A spokesman for the City of London Police confirmed the Greyhound Board of Great Britain are being investigated over allegations of fraud & bribery that had been made against them 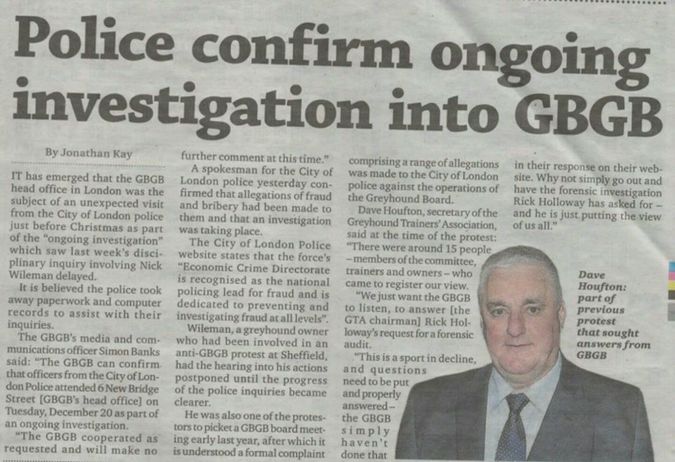 MAJOR FRAUD EXPOSED IN THE GREYHOUND RACING INDUSTRY ?
A recording was brought to the attention of Caged Nationwide, by people within the racing industry who say they are aware of fraud involving the bookmakers. We were told the recording was taken by an insider after a dog was withdrawn at Sittingbourne greyhound track, and deemed lame. Insiders say, the dog was never lame, but had been withdrawn from a race after bookmakers put pressure on track management and the track feared that they would lose their BAGS contract, if they did not comply.
SHOCKING BEHAVIOUR BY GBGB DIRECTOR JOHN CURRAN
Below is the shocking video footage taken from a protest outside the Greyhound Board of Great Britain head office. Greyhound trainers from the GTA are asking for a forensic audit into the GBGB accounts. Kinsley greyhound stadium promoter namely "John Curran" who also sits on the board at the GBGB, shows his true colours when approached by greyhound trainers asking questions.
Click here to sign petition for a forensic audit
(Video's contains foul language.)
Greyhound Board of Great Britain claimed the demonstration by the Greyhound Trainers Association was illegal & clamed the GBGB staff was verbally abused & felt threatened, the GBGB issued threatening solictors letters to many of the greyhound trainers who attended, the same greyhound trainers responded to the claims of the GBGB from their own solicitor which you can see below. (Click pictures to enlarge)
Legal bills starting to hit the GBGB, money that
​ could be better used on greyhound welfare
(Click pictures to enlarge)
We have been informed that the company 'SSS' (Sports Stadium Specialists) who completed the work on Towcester Stadium had a member of staff closely related to the director of the Greyhound Board of Great Britain. A track that would supposidly cost £600,000 to construct cost £1,800,000 with incorrect materials supplied for the track. Greyhounds have had devastating injuries at this track which many believe is down to the improper and dangerous surface.

The below email has fallen into our possession 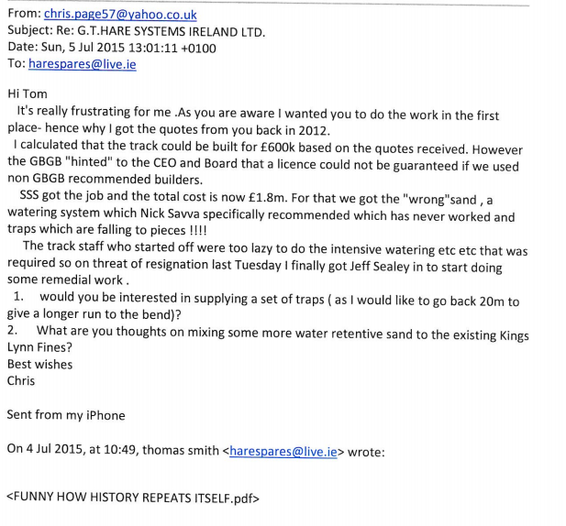 The below email we recieved shows the connection between the controller
of SSS & his Grandfather John Curran who is the promoter of Kinsley
Greyhound Stadium and sits on the board of the GBGB.
Click email below to enlarge

THE GBGB vs THE GREYHOUND TRAINERS ASSOCIATION
The Greyhound Trainers Association show concern over how the GBGB are managing the greyhound racing industry. See the below letters from GTA chairman Ricky Holloway to the Chairman of the GBGB Tom Kelly.
Click articles to enlarge
Injury sheet for Crayford Stadium.
Dated from the 25th July to the 8th August 2015
GBGB Chairman Tom Kelly's reply.
Click letters to enlarge
It's clear the chairman of the GTA (Greyhound Trainers Association) Ricky Holloway is flagging up concerns regarding welfare & corruption within the industry & in return the GBGB clearly are closing him down as seen in the letter below. 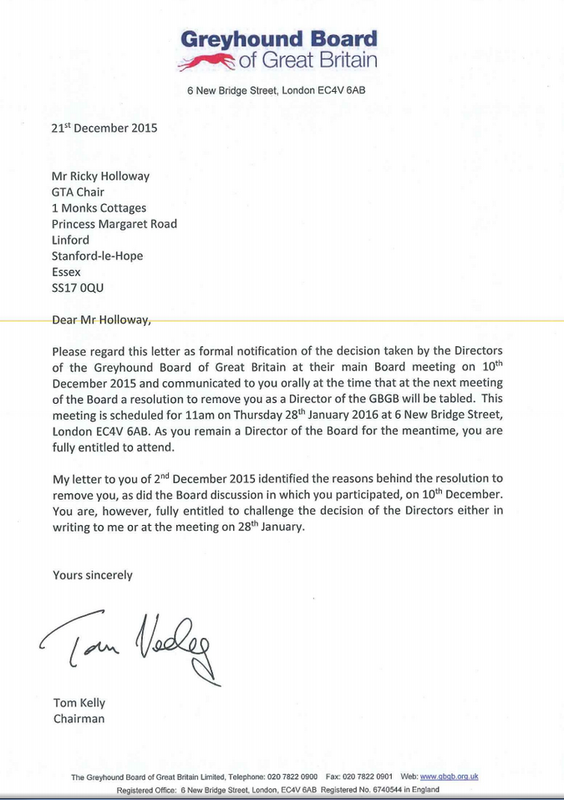 Greyhound trainer & GTA Chairman Ricky Holloway questions the integrity of the Greyhound Board of Great Britain and in return the GBGB remove him from the Board of Directors. 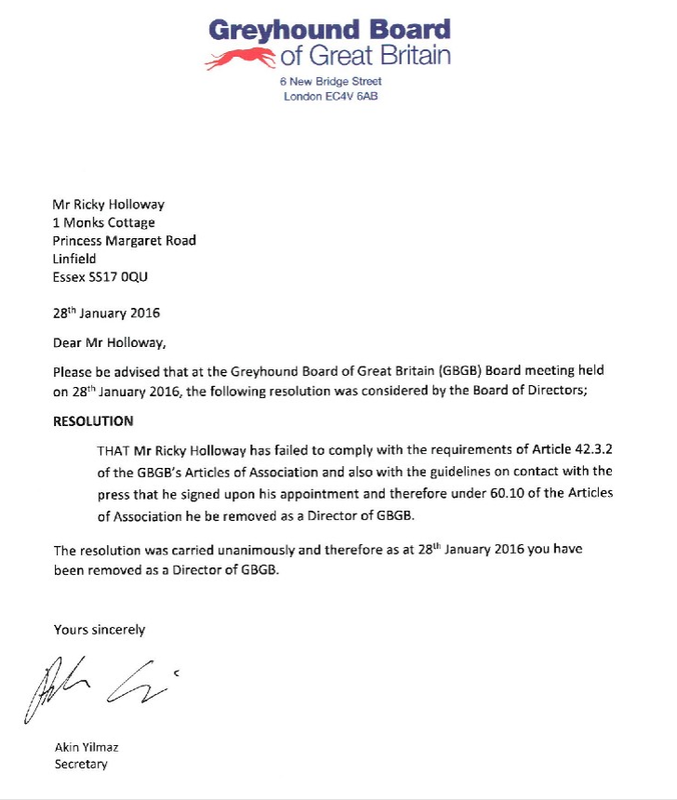 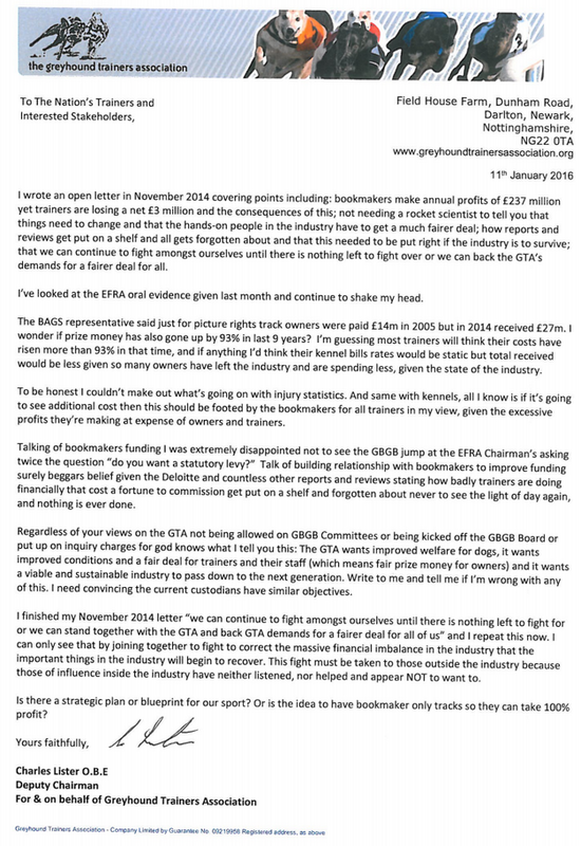 The below statement has been circulated online & contains information relating to;
(1) Race fixing
(2) Destruction of Greyhound puppies
(3) Drugging greyhounds
(4) Exploitation of the Kennel hand
Click statements to enlarge 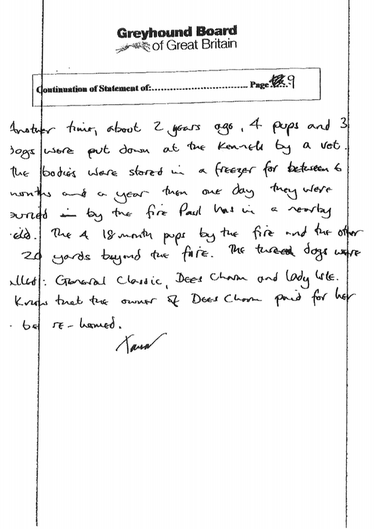 The British Greyhound Racing Fund
What is the BGRF being spent on ?