JUSTICE FOR BOBBY
Bobby was deprived of vet treatment after sustaining an injury at Askern greyhound track
On appealing for further information, we received the following reports from insiders;

"Mr Robert Smallwood and his friend, Mr Tony Mongey had arrived at Askern track with Bobby at 9am on 14.02.16 whilst no vet was present.

Bobby was hand slipped by both men at 9.25am.
He crashed into the railings and sustained a broken hock.
Bobby was then taken to their van and left for at least one hour, alone and with an injury whilst the men had breakfast.
The dog was later taken back home with them and did not see a vet under their care. Bobby was left overnight without any veterinary care whilst carrying a broken hock"

It was not until the following day, that Bobby was taken to Birmingham Greyhound Protection. Mr Smallwood told BGP rescue that the dog was hand slipped by another individual at the track and that he had rescued him.
Birmingham Greyhound Protection immediately took Bobby to the vets and agreed to pay £2000 for his treatment, but it was too late.
​2 year old Bobby passed away whilst under anaesthetic. It was all too much for his body to handle. 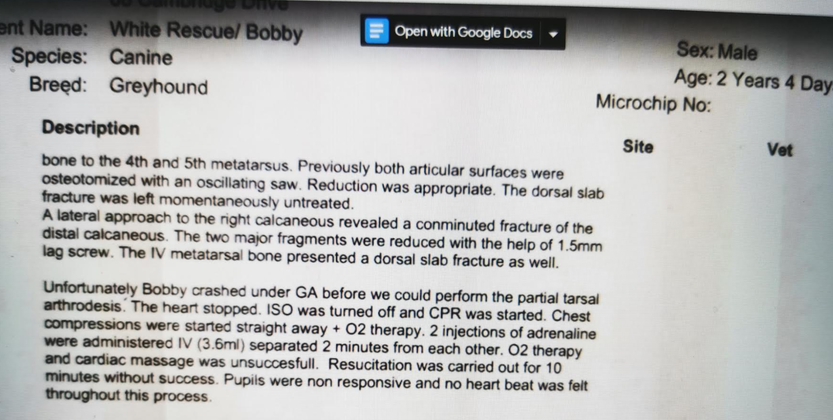 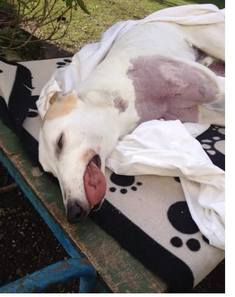 Following the exposure, we were advised that Mr Tony Mongey (BELOW LEFT) and Mr Robert Smallwood (BELOW RIGHT) were later banned from Askern track.
Caged Nationwide contacted the Local Authority who refused to act on the basis of lack of evidence that the dog was not given painkillers.
Kerry Elliman founder of Birmingham Greyhound Protection wrote the below statement on being informed about Bobby

"On Sunday evening I got a message from my friend who had just been to a greyhound flapping track (Askern). He Saw a white male go crashing into the fence, rolling 3 times then getting back up and running with his back leg clearly broken. My friend went up to the trainer who was dragging this boy and telling him to hurry up. My friend pointed out the poor dog couldn't walk but the trainer refused to pick him up as he was too big. This boy was heading straight to be put to sleep because with a broken leg he wouldn't race again which means he won't make money. The poor boy wasn't checked by a vet as there was no vet on site so he was just left with his poorly leg."

It was later found that Mr Smallwood who had posed as a greyhound rescuer had misled Birmingham Greyhound Protection but later admitted to racing dogs at Askern track, including Bobby who was injured. The rescue later severed all ties with Mr Smallwood.
​Jim Kenyon released the following statement:
"The Greyhounds REGISTERED NAME IS MUSTANG BLAZE- evidence provided is the dog was bred by Shaun Bourke, Ireland and was AQUIRED BY ROBERT SMALLWOOD AROUND THE 14th of JANUARY 2016, un chipped after racing at Gretna SCOTLAND, any further evidence to bringing these persons to justice can be passed on in confidence by contacting me JIM KENYON on 07599254462. All assistance will be given and passed on to the POLICE under DEFRA'S GREYHOUND WELFARE LAWS RE - IT IS A CRIMINAL OFFENCE WHILE IN THE (CARE,SUPERVISSION,OWNERSHIP) BY ANY PERSON WHO KNOWINGLY causes pain and un necessary suffering TO A GREYHOUND.
(AFTER TAKING LEGAL ADVICE, DUE TO THE SERIOUS LEGAL AND CRIMINAL IMPLICATIONS IN THIS CASE NO FURTHER POSTS WILL BE MADE BY ASKERN WELFARE PERSONEL, ANY FURTHER INFORMATION SHOULD BE PASSED ON AND NOT POSTED ON THIS SITE TO AVOID PREJUDICE OF SECURING A CONVICTION)"
Jim Kenyon,
ASKERN GREYHOUNDWELFARE OFFICER

Barely a puppy used, abused left
to suffer alone, deprived of
treatment by two ruthless men
that just seen Bobby as another
commodity to make money !

RIP BOBBY
Run free over the bridge and never look back.