Charlie was found in December 2011 roaming around the Chatelherault Country Park in Hamilton in a dreadful condition, he was very emaciated and was full of pressure sores all over his rear legs and his bottom. It was thought that he was taken to Scotland to compete at the race tracks. He was helped back to health by the aid of the Scottish SPCA. He was treated Lanarkshire Animal Rescue & Rehoming Centre in Hamilton where the staff gave him the name Charlie.
Charlie was described to be "extremely thin & covered in painful, untreated sores all over his body"

We don't know how Charlie come to end up in Scotland in December 2011 when he was being raced at Crayford Greyhound Stadium in Kent, his last recorded race was April 2011 in which he came last barely finishing, the name he was given was Lordsbury Cob, his trainer at the time was called Gemma Davidson. 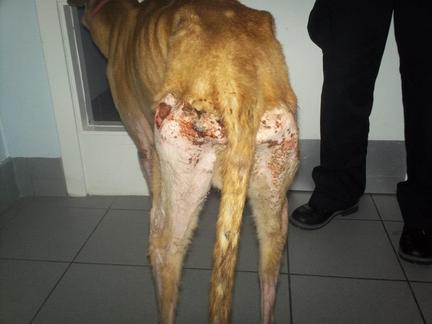 Although Charlie suffered horrific pain & fear he has now landed on his feet with a loving family, although his memories will remain with him his future is a very positive one. He has even got his own piece on this blog (click here). You can see in the pictures below how a bit of love, care & affection can work wonders.
Charlie's owner Fiona says:

When we first rehomed Charlie, he had a lot of fear aggression issues, and we worked with a pet behaviourist, who gave us some invaluable advice and holistic recommendations. I found that although we would leave the radio on to sooth him, he was still displaying signs of anxiety if either I or my husband moved around the house. He had clearly suffered some form of abuse at the hands of his previous owners and was determined to display signs of aggression if we tried to tell him to get down from the couch or not to do something. Within the first week I had been bitten on the arms and face, and he would jump onto the couch next to me then snarl and snap at me if I tried to move off it.
He was never encouraged onto the bed/couch, but as any greyhound owner knows, they seem to have a natural homing device to them!
It was really 6 months of positive reinforcement training, Relax My Dog Music and Zylkene that allowed him to let go of the fears that possessed him and realise we were there to love and care for him and provide him with a new life.
He had, when we rehomed him, been in four different homes (2x trainer, 1 home but returned due the above mentioned issues), with 4 very different lifestyles/rules, so we knew we had to persevere.
My husband, years ago, had been the convenor for the Greyhound Awareness League (GAL) and was superb at reassuring me that he would improve and that we just had to batten down and ride the storm. It wasn't easy, but 6 months later, one night, he got off the couch with a voice command! I could have cried!
We're now 14 months into having him in our lives and he is perfect! He's fab with all the dogs that I board/walk, and has never bothered with cats/small animals.
There used to be a few folks would pick up their small dogs when I passed, prompting me to laugh and say 'take it your dog is aggressive?!', which would always open the conversation up about how Charlie is fine with other dogs (and that picking up a small dog will only ever make them worse around big dogs, not better!). In a lot of ways, having Charlie has helped to dispel a lot of greyhound myths when I'm out and about doing my dog walking.
When you consider how many of these gorgeous dogs there are, DESPERATE to show their love and affection, then having such a handsome hound on my arm will only help raise awareness and see even more of them rehomed. 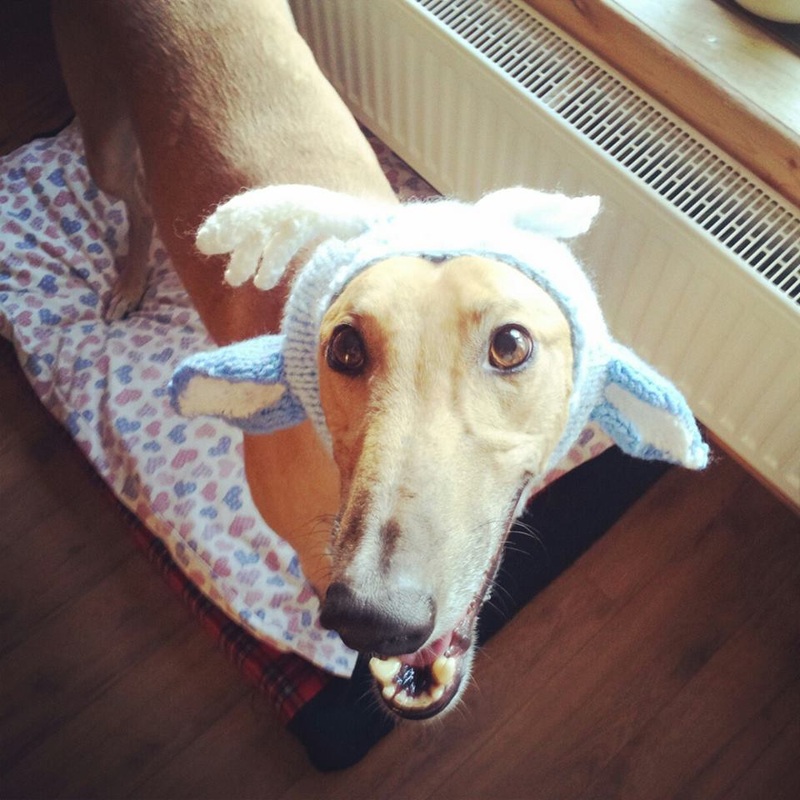