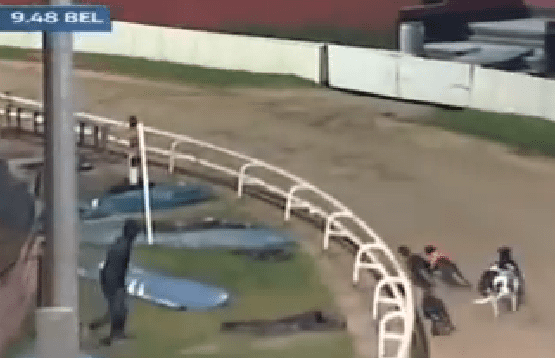 SUCCESS!!!
GBGB Withdraws Dog From Race, Following Our Complaint to the Gambling Commission, Trading Standards and the RSPCA

Greyhound 'Rollinginthedeep' had 5 previous races where he was a winner, but on the 22nd of December 2016, it was declared by The Racing Post that he went lame on the 3rd bend at Belle Vue track finishing 4th

The following week on the 29th December at 9.48pm, 'Rollinginthedeep' was raced again from trap 3, labelled a favourite by the gambling establishments.
Rollinginthedeep lost his footing near causing a collision while bumping into another dog 'Somemotherschild' as seen in the above image
before finishing 5th after the struggle to get around the track.
Earlier that evening, hundreds of concerned dog lovers had called the track, to ask that the dog be withdrawn from the race, but Belle Vue proceeded to race the dog

​Success - Rollinginthedeep was scheduled to race again, on the 7th January 2016, but after we made numerous complaints, the GBGB told us they would agree to withdraw the dog from this particular race, but he would be raced again in the future

A greyhound racing insider told us that dogs are pre race vet checked at Belle Vue stadium according to regulations, but in the few seconds that they allow for an examination, it is impossible to diagnose an injury

Racing a dog with an injury will aggravate it, causing further damage to bones and tendons which could lead to destruction of the dog

Symptoms may not show until 24hrs after a race, meaning dogs are sent home with injuries, on weekends and evenings when trainers and owners will not seek any veterinary attention for the dog, additionally spectators may be unaware that they have just watched a race where a dog will be killed afterwards

The Dogs Need Your Help Today!

We urge people to contact the GBGB and ask for 'Rollinginthedeep' to be thoroughly examined for any injury, prior to being raced again, in the future
​
Please Contact Welfare Officer of the Greyhound Board of Great Britain (Governing body of the greyhound racing industry)
Welfare Officer - Duncan Gibson
duncan.gibson@gbgb.org.uk
Or call - 02078220900

If you do not receive a satisfactory reply, please contact United Kingdom Accreditation Service (UKAS)
On - info@ukas.com
Or call - 01784429000

Appeal
​
​Do you know of a dog that is being raced on a regulated track, while carrying an injury?

​Please contact us in private, on 07508847162
​We understand that some people may want to report a breach of regulation, but are concerned for their professional position, therefore we promise full anonymity for all callers.