Below is the full RTE Investigates - Greyhounds Running For Their Lives, aired on RTE One, Wednesday 26th June 2019
Click here to watch the programme
AN AVERAGE OF 500 GREYHOUNDS DESTROYED PER MONTH IN IRELAND
Following 'RTE investigates' contacting the IGB for comment; A report from 'Preferred Results Ltd' has been released by the IGB themselves. The report was originally deemed strictly confidential. The report is damning & includes the estimated figures of Irish Greyhounds culled.

The report announces shocking and newly released figures that the public may find highly disturbing, including estimated numbers of puppies and dogs culled between 2013 and 2015 whilst it takes into account the Irish bred dogs exported to the UK, and also the minority used for coursing.

The greyhound racing industry has had almost a century to introduce acceptable standards of welfare for  greyhounds, but sadly have been unable to do so, due to the overbreeding of greyhounds and destruction necessary to maintain a profitable industry. 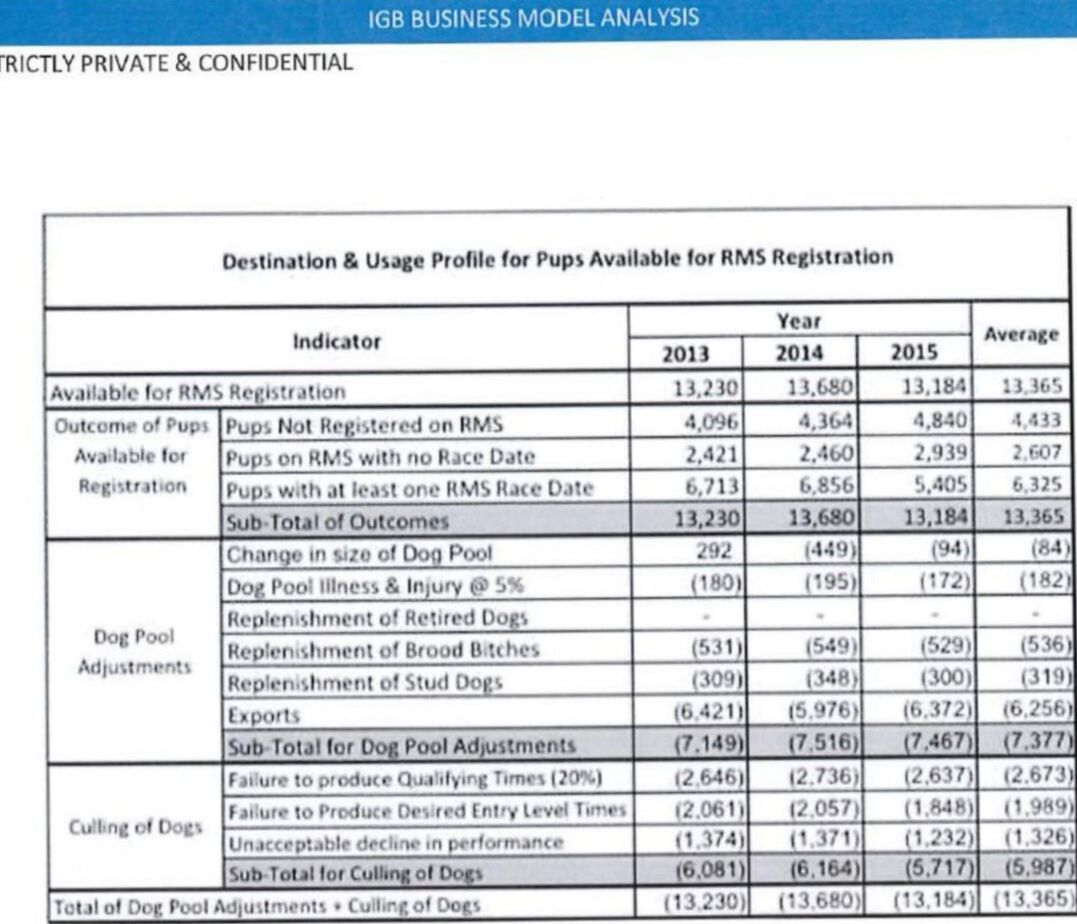 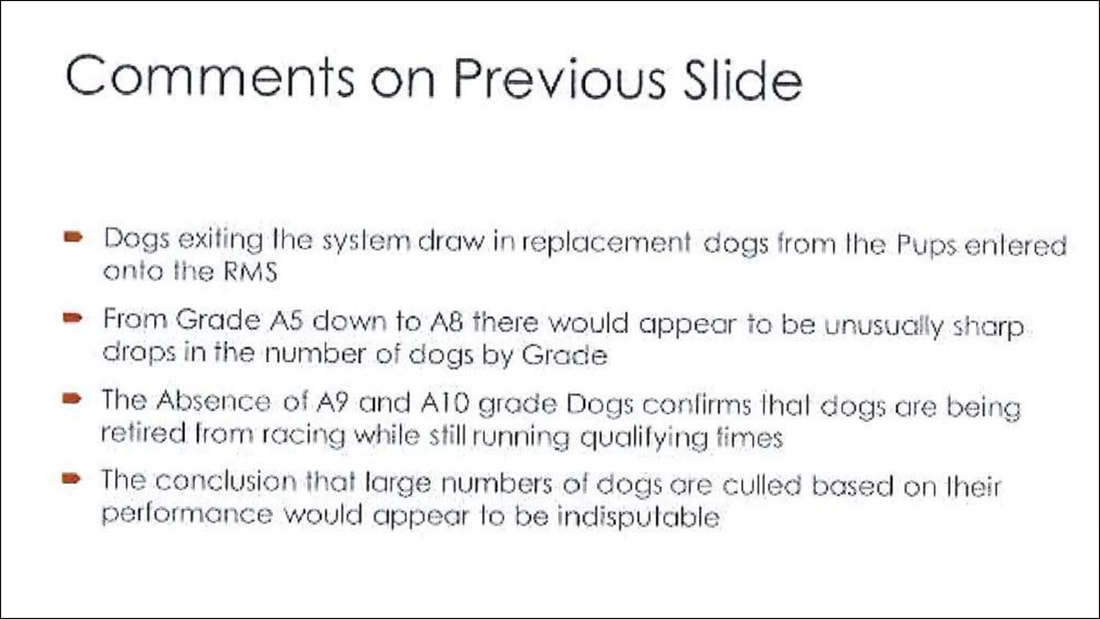 REF;  PREFERRED RESULTS LTD, REPORT (THE FULL REPORT CAN BE FOUND ON THE IGB WEBSITE)
https://www.igb.ie/globalassets/talking-dogs/pr/preferred-results---igb-organisation-restructuring-report---pages-1---65-compressed.pdf

The IGB are at present being taken to the High Courts for defamation over public statements they made relating to the reliability of the report.

We have maintained throughout the last 7 years that the bolt gun is actively being used but the pro racing community claimed we were creating propaganda.
Everyone involved in greyhound racing and any 'rescues' who protect abusers are betraying the dogs as they have the blood of 6,000 puppies killed annually on their hands.
The documentary broadcast the most shocking events; greyhounds that were visibly frozen with fear were being dragged against their will before being shot through the head and then left to suffer, writhing in agony and slowly dying alone.

"6,000 under-performing greyhounds are being killed in this country every year, with dogs being shot for as little as €10, a shocking documentary reveals. An investigation into the industry, which received €16.8m in Government funding this year, reported that 16,000 greyhounds are born in this country each year. According to a business analysis report from 2017, which was commissioned by the Irish Greyhound Board, some 5,987 of these are killed because they fail to make qualification times or their performance declines.
'RTÉ Investigates' laid bare the massive over-breeding in the industry as it reported it is estimated that 1,000pc more dogs are bred each year than are needed to sustain the industry. The documentary 'Greyhounds, Running for Their Lives' revealed how half of the 30 licensed Irish knackeries contacted said they'd be willing to kill greyhounds for as little as €10 to €35 each. In shocking undercover footage, the programme shows four greyhounds being killed and dumped in a skip. In one disturbing scene, a dog is seen writhing in agony after being shot with a single bullet to the back of the head. This is despite assertions by the Department of Agriculture - which licenses and polices knackeries - that "dogs, including greyhounds, are classified as a Category 1 animal and cannot enter a Category 2 plant (knackery), dead or alive. Euthanasia of greyhounds or other animals ... is not approved", according to RTÉ. The programme also explores how the Dáil was told that just six greyhounds were exported to China since 2016 despite evidence of 20 Irish greyhounds being sent there, where they have ended up in breeding labs to source dogs for the underground dog-racing scene there"
Irish Independent


"Here is a particularly gruesome riddle: When is a dog not a dog? The answer, according to an extremely disturbing, eye-opening report, is when it’s a greyhound. Under Irish law, these lean and hungry creatures are not classified as dogs at all, but as farm animals. Perhaps they are impressive at pest control, or very good at pulling tiny ploughs, because otherwise it makes no sense. No other farm animals would be treated so appallingly. Long before RTÉ Investigates: Greyhounds Running for their Lives (RTÉ One, Wednesday, 9.35pm) has ended, you watch searing evidence of the unimaginable scale of cruelty that comes with treating greyhounds as something less than dogs.
Overbreeding in Ireland, estimated at 16,000 born each year, creates a massive surplus of greyhounds, for a racing industry in obvious freefall. Owners, race attendance and advertising have fallen in number by roughly half in recent years. Is it due to desperation, then, or abomination, that almost 6,000 healthy, “under-performing” dogs are killed every year?
As farm animals, greyhounds fall under the remit of the Department of Agriculture, Food and the Marine, which allocates close to €17 million of taxpayers’ money to the Irish Greyhound Board (IGB), the organisation that oversees racing, gambling and welfare. The IGB, which made a confidential report public once RTÉ had gained a copy, has been aware of the scale of the problems facing the industry for some time. Those include missing dogs, doping, unreported international trade, and the suffering and malicious slaughter of animals.
If Conor Ryan’s report seems exhaustive, it may be because damning evidence is not hard to find. Prominent Irish trainers have been charged with doping offences but, with little meaningful sanctions, recidivism is rife. Mutilated dogs are plentiful, their ears hacked off or burned with acid to prevent identification, because, one rescuer explains, “he’s just been a failed racer”. The IGB-commissioned report described a greyhound population that is “out of control”, where widespread culling “could threaten the very existence of the industry” and action was needed to prevent “below-cost dumping of dogs in the UK, which is ultimately underpinned by the Irish taxpayer”. (We see Gerard Dollard, chief executive of the IGB, quibble with the figures on Claire Byrne Live.) The programme easily lifts the lids on hare coursing practices, filming unsanctioned meetings week after week on Whiddy Island, attended by leading figures in the community. But it is most disturbing when it follows the consequences of dumping surplus dogs or of clandestine sales beyond the UK. When the transportation of 24 Irish dogs to the infamous Canidrome in Macao was exposed in 2016, the IGB admitted “huge reputational damage”.
When the picture here freezes – but not the soundtrack – as one dog in China is hacked to death, or when it keeps rolling as another squealing dog is boiled alive, you wonder what reputation anyone involved has left to lose. Closer to home, the trade in knackering is so flagrant that a camera captures the full sight of a greyhound shot in the head, and its collar returned to the waiting owner, while the animal writhes on the ground for several minutes until its death. Greyhound racing, like the IGB itself hopefully, is right to worry for its future, because it depends on drawing new fans and on its significant government subsidy. To put it another way, that is our money, those are our dogs. Ireland, this commendably revealing programme reminds you, is one of the last eight countries that still allows greyhound racing. Maybe it’s time to put this sorry affair out of its misery"
Irish Times


'RTE investigates' contacted the IGB for comment;
The report from 'Preferred Results Ltd' was released by the IGB after they were forced to do so. The report was originally deemed strictly confidential.
The report announced shocking figures that the public would find highly disturbing, including estimated numbers of puppies and dogs culled between 2013 and 2015 whilst it had taken into account the Irish bred dogs exported to the UK, and also the minority used for coursing