MANCHESTER GREYPRIDE 2016
CAGED NorthWest are proud to have been part of the 2016 Manchester Gaypride parade on the 27th August 2016, we took our lovely greyhounds into the parade to show the general public just how beautiful these dogs really are. 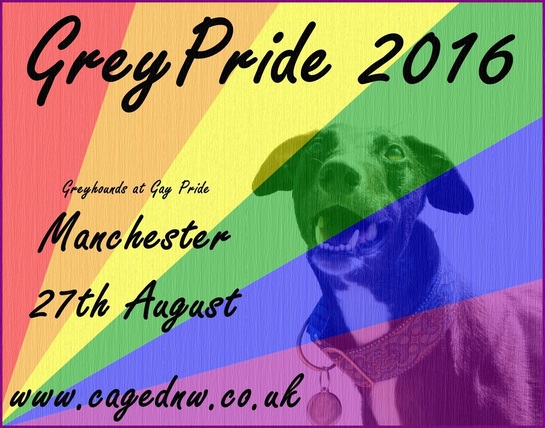 August 27th 2016, saw Caged North West enter the Manchester Gay Pride parade under the heading ‘Grey Pride’. Advocates and their hounds dressed for the occasional in bright attire, garlands, and colourful neck adornments for the dogs, to join the carnival atmosphere. We set off along the route, waving flags and banners to promote greyhounds as pets. Information leaflets, badges and stickers were also distributed to the thousands of crowds lining the streets, raising the profile of Birmingham Greyhound Protection, Greyhound Gap and Caged North West – the three groups who came together to support the event. As well as bringing the beautiful hounds into contact with a huge audience, the day raised £179 in kerbside collections from generous members of the public. With funds raised prior to the event from merchandise sales and donations, we were able to give £205 to each of the three participating organisations, after the event. So much positive feedback was received on and after the day and the formal award from Pride for Best Walking Entry highlights how well the dogs were received and each and every hound is deserving of the centre stage where Pride judges placed them. We look forward to next year’s Manchester Gay Pride, with entry to other Pride events around the country also being considered for 2017. We can build on Manchester’s success and take the message around the nation, where greyhounds in need of homes are waiting.