Please help the We Want Wimbledon Closed
Campaign by giving a small donation to help
with the costs of the campaign.

You may have read that Wimbledon Stadium is back as an issue. The greyhound racing lobby are currently planning to make their feelings known to London mayor Boris Johnson concerning the future of the Stadium (see full story by clicking the link below) .
Full story: Click Here
Risk and Galliard Homes jointly own the existing site and hope to get approval for an enabling development around a large number of houses that will support a new football stadium, but without greyhounds, for AFC Wimbledon. 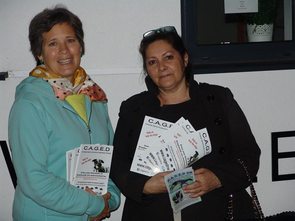 We would like to thank Debbie and Corrine for their wonderful work. The Wimbledon Park Residents Association organised a meeting where the pro racers where to show off their proposed plans for a new greyhound stadium. The two dedicated greyhound advocates covered the main entrance of the hall, while issuing leaflets to all those who entered, they told us that they explained about the cruelty while distributing Caged North West non-graphic and graphic leaflets.
Paschal Taggart clutching at straws


AFC Wimbledon, in partnership with Galliard Homes, hope to build a 20,000 seater stadium on the site of the current Wimbledon greyhound track on Plough Lane. The move will see The Dons return to their spiritual home after twelve years of playing at The Cherry Red Records Stadium in Kingston upon Thames.

Please click the link and apply your comments in support of the football stadium;  http://www.redevelopingploughlane.co.uk/contact_us 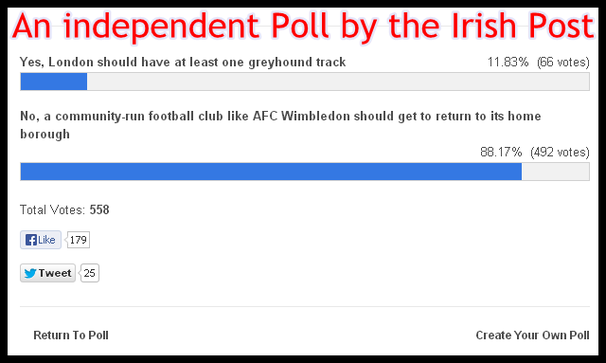 The present owners - the GRA (Greyhound Racing Association) and Galliard Homes want to build houses and retail units on the land. Wimbledon AFC also want the land to build a new football stadium. So even if Merton council deem a new stadium acceptable - the  industry still have to buy the land from the present owners who clearly don't want to sell. The reason why the industry have planned this 'Show of Passion' is because Boris has backed down somewhat from giving his 100% backing to a new greyhound stadium. The Deputy Mayor - Edward Lister-  has recently stated "The Mayor has always been of the opinion that Wimbledon Stadium should remain a greyhound racing venue. However, if this is not viable, he would accept the site being used for other stadia-based sport, as long as it is in line with strategic planning policy." There is plenty of evidence to show the industry is not viable and indeed Boris used this reason when he made his decision over Walthamstow.
The story of Wimbledons Bubbly Totti, the
£50,000 St Ledger winner left to rot.
Click here to read bubbly totti's news article 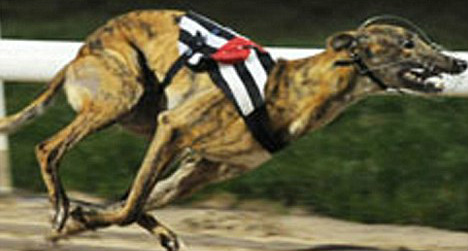 Many greyhounds have tested positive for performance enhancing drugs & many trainers have been fined for doping the dogs at Wimbledon. 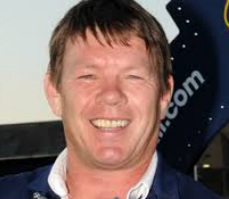 Stuart Mason a top greyhound trainer was banned after his greyhounds tested positive for Cocaine & Benzoylecgonine 'Droopys Arshavin' and also 'Ballyard Buddy' was found to be given an amphetamine, both following races at Wimbledon Greyhound Stadium. Mason was given a fine & a 2 year ban which was later reduced to 3 months by the GBGB (Greyhound Board of Great Britain) after an appeal. 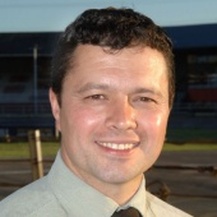 "Professional" Trainer Jason Foster was fined £1000 after the greyhound in his care was found to be drugged with the Class B drug Speed. A urine sample was taken from the greyhound 'ALL SENSATION" and was analysed by LGC Health Sciences and found to have the presence of amphetamine. Mr Foster is a committee member of the Greyhound Trainers Association.

Another Wimbledon dog tested positive for a banned substance 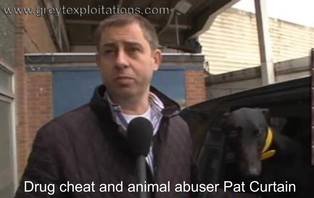 The heats for the Wimbledon William Hill Derby are underway and already one trainer - Pat Curtain has breached the rules.
The 3 year old greyhound Kereight King was found to have the banned substance stanozolol in his system while under the care of Pat Curtain - the same steroid used by shamed athlete Ben Johnson.
The 3 year old black male greyhound is jointly owned by champion jockey AP McCoy.
It is an offence under the Animal Welfare Act to give an animal a dangerous substance but Curtain will only face an internal disciplinary hearing for attempting to affect the performance of a greyhound. He will not be disciplined for any welfare offence.

Mr Pat Curtin was found in breach of rules 174(i)(b) & 217  A urine sample was taken from the greyhound SHELBOURNE ASTON at Wimbledon Stadium on the 2nd May 2009 and was analysed by HFL Sports Science laboratory. The results showed that the urine  contained metabolites of stanozolol; and the administration of any substance that could affect the performance and/or well being of the greyhound. Mr Curtin failed to attend the disciplinary. The Disciplinary Committee ordered that he be reprimanded and fined £850. 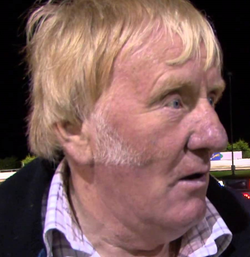 2 Greyhounds at Wimbledon tested positive for Morphine.
Greyhounds RUTHLESS MAN & KATIES TANGO who are both under the care of trainer John Magee had the drug found in their urine.
John Magee has a history of doping the dogs in his care yet he was still allowed & welcomed to be part of the racing at Wimbledon. 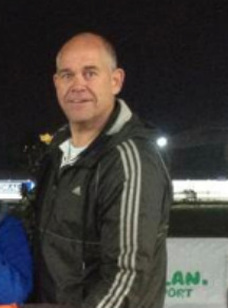 Greyhound LENNYS LUBO was given the steroid Stanazol while under the care of professional trainer Mr Richard Rees.
Wimbledon Stadium Greyhound trainer Mrs E McNair fined after the greyhound in her care tested positive for Stanozolol 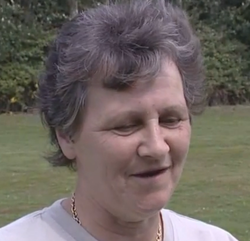 Greyhound trainer Mrs Elizabeth McNair was before the  stewards  due to a urine sample taken from the greyhound CARLSBERG FLASH at Wimbledon Stadium analysed by HFL Sports Science laboratory as containing substances consistent with being metabolites of the drug stanozolol; the administration of any substance that could affect the performance and/or well being of the greyhound; and not using her best endeavours to ensure that the performance of the greyhound was to the satisfaction of the Stewards. Mrs McNair was in fined the sum of £600.
Wimbledon Stadium Greyhound trainer  Maxine Locke fined after the greyhound in her care tested positive for Stanozolol 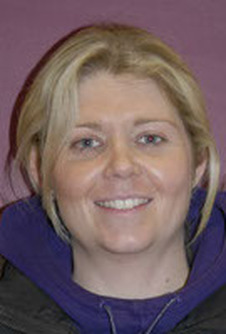 Professional trainer Maxine Locke was before the stewards after a urine sample taken from the greyhound ASTRAL BOUND at Wimbledon Stadium was analysed by HFL Sports Science laboratory as containing substances consistent with being metabolites of the drug stanozolol. 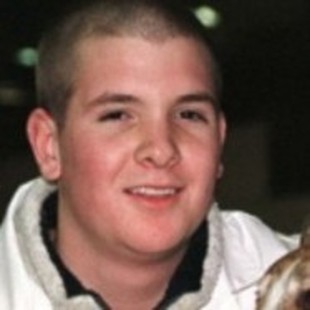 Another greyhound at Wimbledon was found with the drug Benzoylecgnine  which is the primary metabolite of Cocaine. Greyhounds AYE JAY & YAK YAK JOE trained by Mr Andrew Peacock tested positive.

Chris Mosdall was filmed by an undercover reporter on
BBC’s Panorama programme boasting about
drugging greyhounds so they run more slowly than their
competitors so he can fix the results. 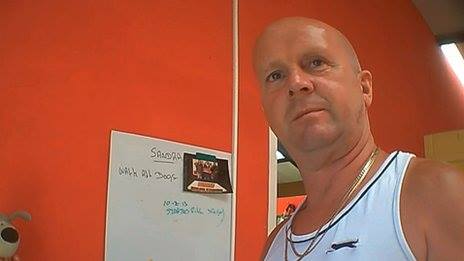 ﻿﻿Wimbledon greyhound trainer attempting to work her magic by drugging dog﻿﻿
POTENT  ANABOLIC STEROIDS were given to greyhound BURST OF MAGIC in attempt to improve the dogs performance. ﻿Trainer responsible for the drugging of the dog while under her care was Ms S Hurley
Below shows a graph of Wimbledon Greyhound Stadium's falling attendance over a 12 year period 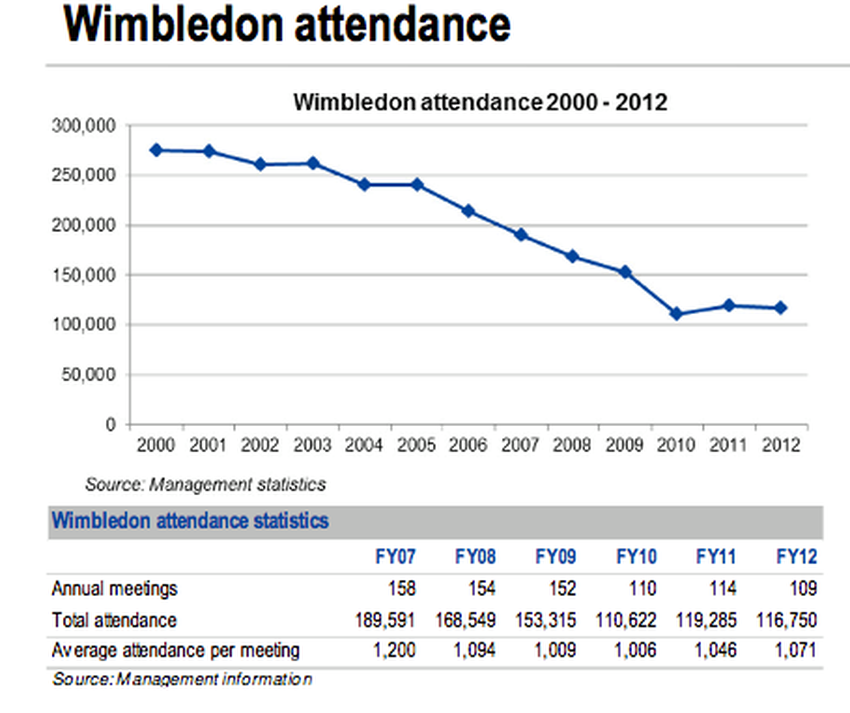 The "We Want Wimbledon" campaign & Paschal Taggart seem to be overlooking the fact that in the last 12 years the public attendance at the greyhound stadium has dropped from over 275,000 per year to 116,750 per year, yet the attendance and support for Wimbledon AFC is increasing year on year. With these statistics showing  massive decline & yet more evidence that the racing industry is failing year on year it would make sense  for the Mayor of London  Boris Johnson to make the right decision and Bring the Dons home. 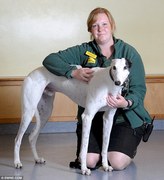 Wimbledon's "expert" track vet failed to see that the greyhound on the left Jack Sprat was in fact blind and allowed the dog to be raced multiple times at Wimbledon, with the noise from the crowd the dog would have been in immense fear. Every single race that Jack Sprat was entered for resulted in him coming last yet the trainer/owner and the track vet could recognise his symptoms. Once they realised the poor Greyhound was blind they dumped him at the Dogs Trust.
For the full story click the picture:
Another greyhound found at
Wimbledon drugged 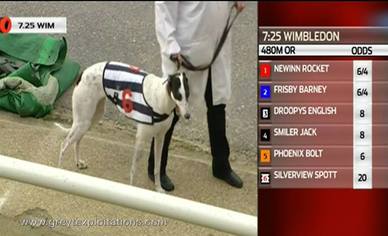 Professional ‘trainer’ Toni Tungatt has been disciplined after being found in breach of rules 174 (i) (b) and 217' of the GBGB Rules of Racing– Silverview Spott – was found to have the anabolic steroid stanozolol in her system when a urine test was taken at Wimbledon dog track on the 1st June 2013 and analysed by LGC Sciences.
Despite this being Tungatt’s '4th drug related breach' of rules – the GBGB deemed it only necessary to fine and severely reprimand the ‘trainer’ 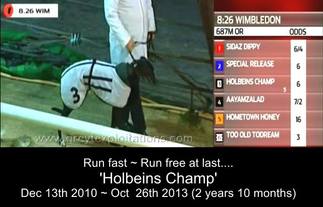 According to information received Holbeins Champ sustained a broken hock at Wimbledon dog track.  Deemed of no further use as a betting product the 2 year old black male was subsequently destroyed the next day. Holbeins Champ’s ‘trainer’ was G J Gower (Snr) and his last registered owner was Mr M J Gower.
Punters fighting inside & outside
Wimbledon Greyhound Stadium 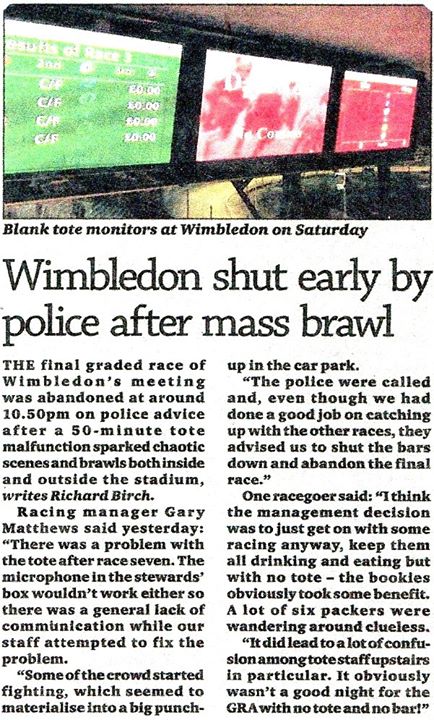 Help fund the campaign by donating below

Much much more to come on this page, keep coming back !