Caged went undercover and began liaising with suspects involved with exports to gather further information, including names of exporters and agents involved in the exports of dogs. Gradually gaining their trust, we were able to learn more about the exports and those involved.

In the process we learnt of ICC paperwork containing the details of one dog named Brinkleys Blaze 'formerly raced and retired in the UK' was held by a breeder in China. This breeder used the name KOKO, and he claimed to have purchased Brinkleys Blaze for breeding purposes.

Caged are now offering a £5,000 reward in return for evidence substantiating the details surrounding the export of Dees Big Fella and the person responsible for sending him to China in the guise of Brinkleys Blaze.

Since uncovering this scam, we have publicly asked questions regarding this particular export and have received a very dark reaction from certain members of the pro racing community, specifically those in the Southern region of England, which in addition to the data on the ICC form, leads us to believe Dees Big Fella may have been sent from the South of England.

It seems we have stumbled on dangerous territory and stirred up a lot of anger within the pro racing community in Ireland, UK and even China, and especially with exporters who are working in connection with Chinese breeders.

Caged discussions that had taken place undercover with Chinese breeders via facebook began leaking out, yet 'not in full context' meaning screen-shots were being manipulated and photoshopped in attempt to discredit Caged findings.

We will continue to find and expose the names of all involved with Chinese and Pakistan exports. Both Pakistan and China have no updated animal welfare laws whatsoever. Greyhounds have ZERO protection from torture and death in these parts of Asia.

We shall not be intimidated by lies circulated within the pro racing community and our work shall continue as usual.
£5,000 REWARD FOR EVIDENCE OF WHO SOLD BIG DEES FELLA TO CHINA
Chinese breeder contacts Caged to be provided with evidence of the scam that cost him £16,000 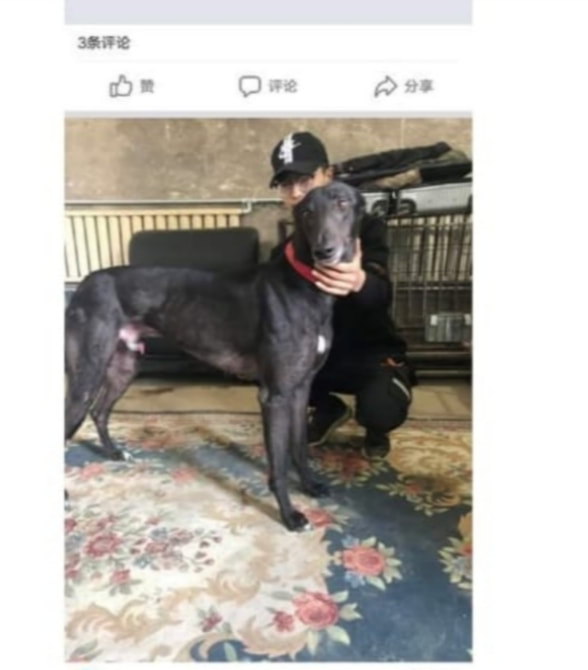 Dees Big Fella in China - Photo provided to Caged by Chinese Breeder
Video of Dees Big Fella sent specifically to Caged for identity purposes by Chinese breeder
Caged Provide evidence of Brinkleys Blaze tattoos to the Chinese breeder and in return evidence containing tattoos and Microchip of Big Dees Fella was sent to Caged by the Chinese Breeder. Caged contacted the ICC immediately and confirmed the tattoos of the dog in China belonged to Big Dees Fella.
CAGED Attempted to rescue Dees Big Fella offering £5000 for him and an exposure on the people who sent him to China
GREYHOUND DATA PHOTOS SHOW BLUNDER CORRECTED FOLOWING CAGED UNCOVERING THE SCAM
Greyhound Data was no doubt caused great embarrassment when Caged Nationwide brought to public attention that Brinkleys Blaze had been homed by Greyhound Trust in Great Britain and was not actually in China as Greyhound Data had claimed.
On Monday 17th February 2020 Caged announced that we had contacted the ICC at 9am and confirmed that Dees Big Fella tattoos matched those of the dog sent to China in the guise of Brinkleys Blaze. From then onwards we began discussions with the Chinese breeder who had purchased Dees Big Fella (More to come shortly)

​See the full announcement below;

We remain curious as to who contacted the breeder from the UK, in order for him to quickly abandon the conversation!
Blue text Caged - Black and white text Chinese buyer 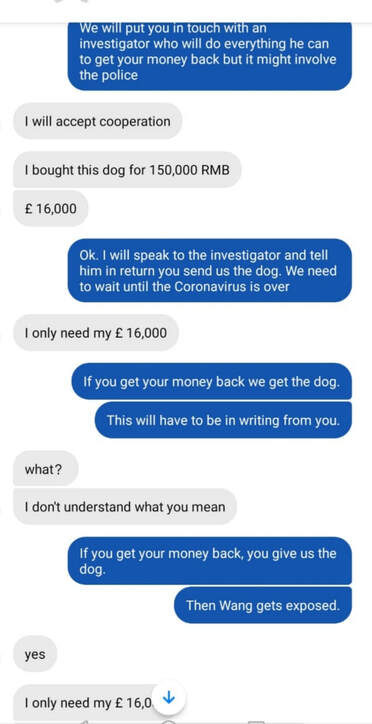 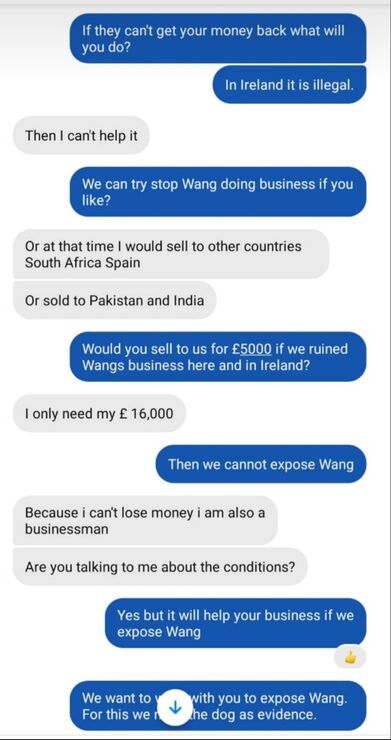 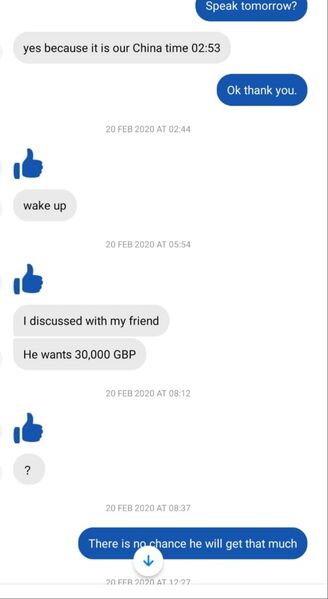 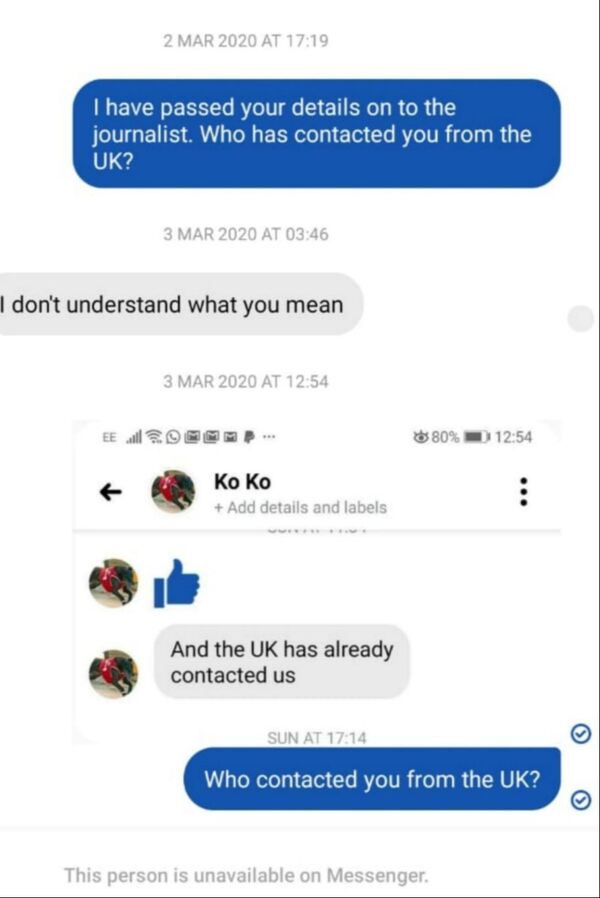 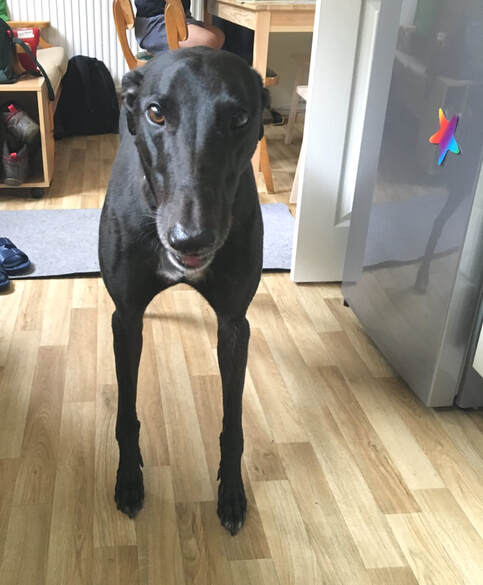 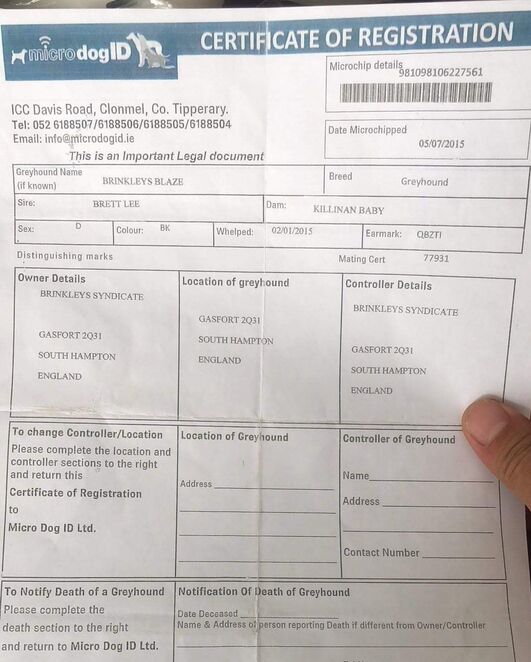