Charity Night At The Dogs
We are aware that the greyhound racing industry is very dependent on charity events held at the tracks as this introduces much needed revenue, but meanwhile this industry continues to heavily decline. We believe this decline is due to members of the public becoming excessively aware of the welfare issues involved in greyhound racing since the many horrific cases of neglect, serious abuse and doping of dogs that have been highlighted throughout the media over the last decade.

Although this may seem like a very controversial matter to some, we have come to realise that a majority of the public are already aware that although greyhound racing remains to be legal, this no longer indicates that it is morally correct, this is a self-regulated industry which is clearly failing to protect the dogs.

Dogs Trust and The League Against Cruel Sports as well as other animal welfare organisations have showed serious concern about the plight of greyhounds used to race.

We fully understand the importance of any charity which is dependent on funds to continue to carry out their aims and would like to think that every charity would benefit from funds offered by the mainstream within the public, rather than risking possible loss of support from those who may have initially funded a cause but chose not to due to what they believe to be poor ethics.

If you are a charity that has recently opted out of attending any venues that use animals for entertainment, due to welfare concerns, please contact us to see if we can help raise some funds for your cause in appreciation for your good ethics.

We recently created a 48hr poll which involved 500 individuals and their views on whether they would support a charity that attended a night at the dogs to raise funds.

The results of the poll can be viewed below. 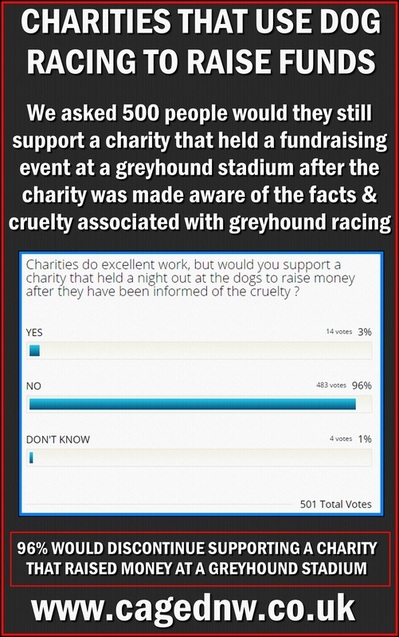 Last year we at Caged North West and our fantastic supporters raised a whopping £1,235.52 for Dorset Blind Association after they cancelled their fundraising event at the greyhound races. Click the link below for more information. www.justgiving.com/fundraising/Rita-James