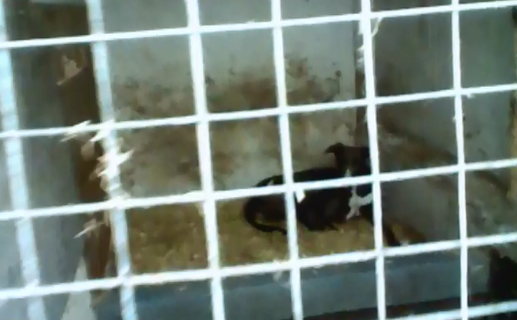 ﻿Some greyhound trainers/owners may have 60 or more dogs, with only 15 or 20 that are actually entered into races - We call this hoarding.
The Greyhound Board of Great Britain will sometimes make demands that greyhound trainers must scale down the amount of dogs the trainer/owner has, as they are unable to provide appropriate care. This often results in greyhound trainers desperately ridding of the dogs in a short spate of time, they will call rescue centres and if the rescues decline to accept them due to the constant overflow of dogs, then they will resort to offering the dogs for free on social networking sites, or will even destroy them.
Some dogs will lack exercise, mental stimulation, companionship and even daylight and good ventilation while being kennelled for around 23hrs per day or more.﻿

The rules and regulations of greyhound racing states that only kennels built after 2010 have to meet required standards.
The bread and butter of the racing industry
A dog that is a regular winner and sustains a common injury during a fall, such as a broken hock will still remain commercially viable. A broken hock can cost around £500 to mend. The cost is met and the dog is given a second chance. The veterinary fees incurred will be more than re-gained as these dogs will earn more than their keep, while being used as breeding machines, with little or no chance of a comfy couch at the end of their days.
Trophy dogs
Dogs have been known to be left to rot away in kennels all because  a trainer/owner  once took a shine to them. These are the dogs who do not get a comfy couch at the end of their racing  days and will never have the chance to be rescued or loved, these are the most unfortunate  dogs that are left with little or no human contact and may be left kennelled alone for the rest of their days, rescue centres may offer a place if they become aware of the situation, but are  sometimes refused these dogs, due to them becoming nothing more than a possession. 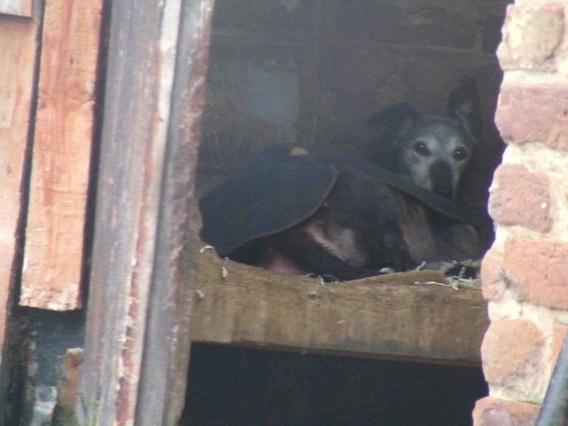 Click Picture for the story about this dogs picture. Picture courtesy of GreytExploitations
Schooling – Where are all the puppies gone?

There will always be dogs that are deemed unsuitable to race

Young dogs will be schooled prior to the owner/trainer making a decision of whether the dog is suitable to be registered to race.
Timid dogs may continue to run through the finish line through extreme fear, making it difficult for anyone to capture them after a race has ended, making them unacceptable.
Behaviour such as fighting or attempting to play with other dogs on the track would also not be acceptable.
Slow dogs will not be commercially viable.
Dogs that have birth defects, for example partially sighted dogs, would be of no use whatsoever and would just use up resources, kennel space, food etc.

Registered Greyhound litters in Ireland 2011 = 3,271
Conservative estimate of 7 puppies per litter = 21,915
Only 16,000 of these dogs were registered to race at 12mths old – Leaving a remainder of almost 6,000 puppies unaccounted for.
(Above figures are according to research done by greyhound protection groups)
Figures have slightly dropped since 2011.
http://www.cagednw.co.uk/breeding-figures.html﻿﻿﻿

The Greyhound racing industry is shielded by any acceptability of abuse or neglect committed by its participators.

Silence denotes acceptability and protects the individuals who abuse and neglect the dogs, this perpetuates the industry as a whole and allows the continuation of vulnerable animals to suffer and die.

Reasons why people may choose silence over exposure;

Vested interests
Financial gain that may be jeopardised by speaking up and exposing a cruelty case; Loss of employment, loss of funding etc

Personal self-gain
A certain amount of self-gratification and feeling of empowerment is fine, but there is a terrible danger that if these feelings over exceed, they may impede on the welfare of animals.

The person may feel they have done enough to help without exposing details of an abuser or reporting a cruelty case, they may have followers who will enrich their feelings of self-gratification and they will naturally want to ensure that these followers are pleased with the final outcome, therefore alleviating them from any further despair by prematurely ending the case as pleasantly as possible. The followers feel they have taken part in something special and the person is praised for their good work, everyone feels happy - except there is one major problem which is never rightly identified, the perpetrator will continue to abuse dogs under their care, not a happy ending for the forgotten dogs, but rather a vicious circle leading to more self- gratification of all those involved.

Desensitisation
Being exposed to cases of cruelty for prolonged periods of time may cause desensitisation, a gradual loss of realisation as to the extent of seriousness connected to any physical and mental abuse of a dog.

Maintaining Friendship
Pretending to hold a neutral view will help people to maintain friendships with both anti and pro racing people.

Fear of retaliation
Possible fear of being slandered or threatened for speaking up against an abuser.

Naivety or feeling powerless
Example; Any individual such as a transporter - Might not be aware that there is cruelty behind the scenes of the racing industry and may be told lies by others, a particular cruelty case may be said to be a rare occurrence or will be dealt with accordingly by staff, a feeling of lack of empowerment and having to place trust in others may enforce his/her feelings of not being in a position to make an official complaint to the Greyhound board. 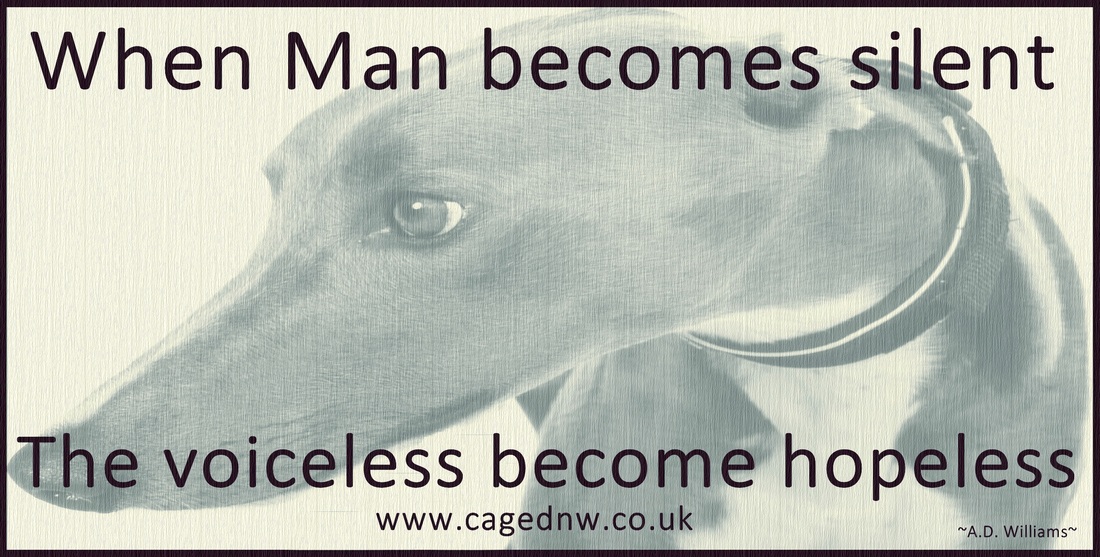